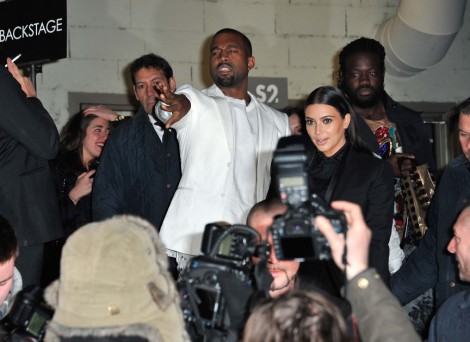 Oh you doctors with all your books and your learnin’, you think you know better than Kris Jenner and Kim Kardashian? Miscarriage, what? They obviously don’t have to worry about that anymore since it was just a false alarm anyway. There’s money to be made!

Yes, not even a week has passed since Kim was rushed to the hospital for what she thought was a miscarriage and she’s already back to work with those crazy Kardashians despite being told to take a break from her doctors. Kim posted pics on  Instagram of herself getting ready for a photo shoot with her family in Los Angeles. I actually can’t tell if Kim is in the photo shoot or just hanging out and watching. She’s got a full face of make-up on but I don’t know if that’s unusual for a casual Friday afternoon. My guess is she probably did get in a couple shots. It’s Kim Kardashian! Baby be damned when a photographer is in the room!

The Daily Mail also reported that Kim’s not only working out with Tracy Anderson seven days a week but she’s also seeing another trainer on the side. I have to call bullshit on that one. Even Kim couldn’t possibly be that stupid (and I know I just wrote that). Who would do two-a-days while pregnant? Who has the energy for two-a-days while pregnant? She could barely make herself do one-a-days when she wasn’t. So it’s hard to know what’s really going on. I doubt Kim’s back to work full-time but I wouldn’t be surprised if she was sneaking in a few photo shoots on the sly. Say what you want about this woman’s intellect/marriages/fashion choices but she is a hustler and likes the monies. Besides, if anything happens, she can just keep blaming Kris Humphries.

Do you believe Kim Kardashian’s back to work? Shouldn’t she know how much she can do? She didn’t before but she’s had a “wake up call” since then, right?