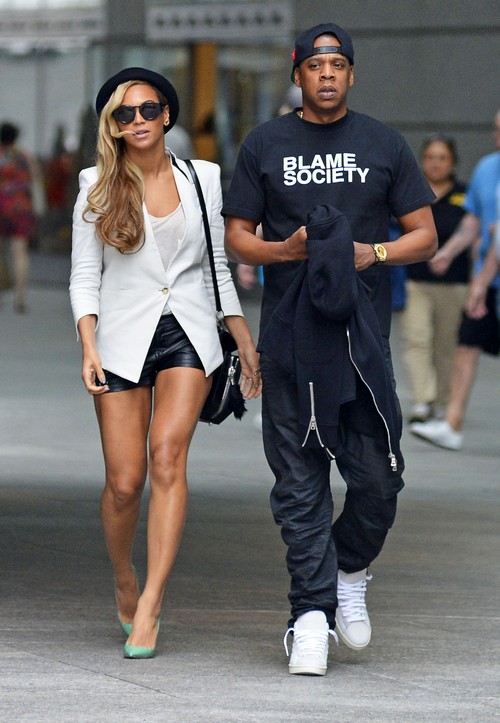 According to a new report from US Weekly, Beyonce and Jay-Z stopped by Kris Jenner’s home a couple of days ago to pay a visit to Kim Kardashian and her new baby, North West. Can you imagine the state Kris Jenner must have been in? Her fingers were probably twitching from restraining herself from calling the paparazzi or E! camera crew.

Anyway, it’s obvious that Kanye West must have asked them to stop over, because I can’t imagine Beyonce suggesting this on her own. Regardless of what her publicist or reps continue to say, her disdain for Kim is pretty obvious at every public outing or event where the two are in the same room. Jay-Z is a lot more diplomatic, but I don’t either of them could be called Kim’s ‘friends’.

Sources say that Jay-Z and Beyonce did not bring along Blue Ivy, but they spent a couple of hours with Kim and North. Kanye is obviously not there since he’s in Milan promoting his music, which I’m sure made it that much more awkward. What would Beyonce and Jay-Z talk to Kim about for a few hours? It’s not like North West can break the awkwardness since she can’t even talk yet. And there’s only so long you can coo over a baby. Do you think Beyonce tried to give her advice on raising a baby? I can’t even imagine the two being civil to each other, forget exchanging advice. See, Kim having a child with Kanye has just led to bizarro world where reality stars are becoming legitimate celebrities now.

What do you guys think about Kim getting a visit from Beyonce and Jay-Z? Do you think they decided to do it themselves, or Kanye asked them? Let us know your thoughts in the comments.