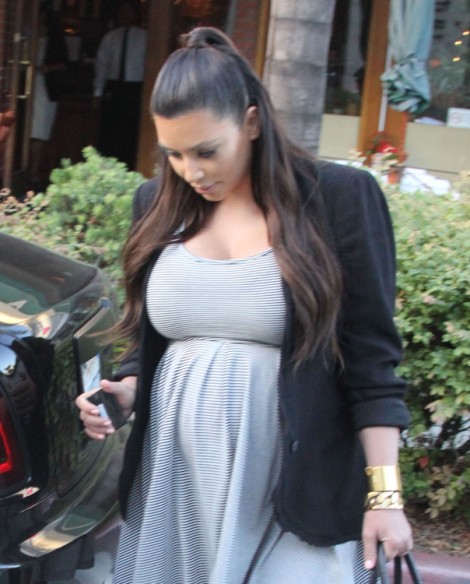 I mean… did you really expect anything else? You could have told me was wasting $10 million on this nonsense and I wouldn’t have batted an eye. It’s Kim Kardashian’s delivery! What is she supposed to do with her money? Give it to charity? Fund a research center? Hells no! She gots to look good for birthing that baby and, apparently, it takes a million dollars to do it.

According to the National Enquirer Kim is sparing no expense to be as comfortable as possible on the blessed day. Not only is she shelling out $4K a night for a luxury suite at Cedars-Sinai Medical Centre equipped with flat screens and full-sized tubs she’s also having restaurant food brought in and a special photographer to capture every second of the event. What? The E! News camera crew isn’t enough? So let’s assume there will also be a make-up and hair person there full-time as well. In addition, she’s also spent around $25K on designer lingerie from Paris because her ass ain’t sharing hospital gowns. And then she’s also expecting a push present from Kanye West because a baby isn’t enough of a gift on that day. The best push present in the world will be if Kanye even shows up. I have my doubts….

You’d think she was pushing the Messiah out or something. Clearly in her mind she is but this is a tad on the ridiculous side although the fact that I felt the need to point that out is ridiculous. The woman is vapid and self-involved. Did we really expect her to change? And why is she so worried about comfort anyway? That epidural/planned c-section isn’t going to hurt one bit. Neither will the tummy tuck that I’m sure is coming right after. Perhaps all these provisions are for the recuperation after?  That makes more sense. At this point are you really surprised by the Kim Kardashian million dollar birth?