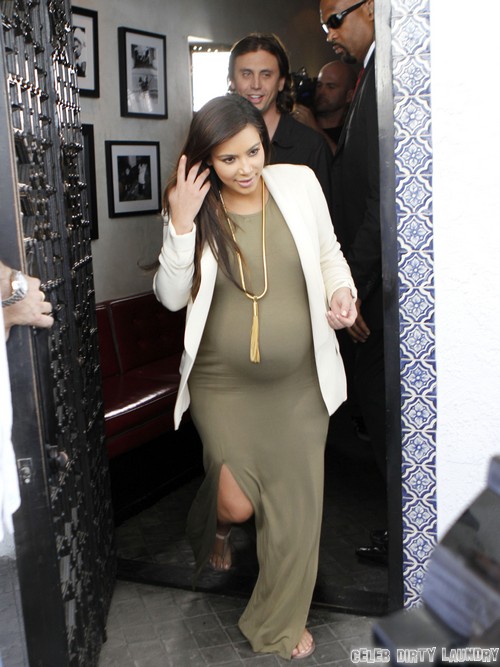 Kim Kardashian, being the Kim Kardashian we all know and love, has already begun talking about her birth. She and Kanye West welcomed their first baby daughter last Saturday, more than a month before the baby’s due date.

Kim hasn’t officially given out an interview about the birth yet, but she supposedly replied to Ryan Seacrest about the birth when he emailed his congratulations. She was reported to have said, “Can’t believe it – it’s so crazy!” Seacrest claimed he didn’t know the name of Kim’s daughter, and even if he did, he probably wouldn’t reveal it.  She can’t very well ignore Ryan – he’s the executive producer of Keeping Up With the Kardashians!

He did also add that Kim was ‘very, very excited’ – call me cynical, but I think in addition to the excitement over the baby, the entire Kardashian family is probably salivating at the amount of money and publicity this baby is bringing them.

E! News presenter Ken Baker also spoke up about Kim’s birth, revealing, “It was not an easy pregnancy. It was hard for her, and what I’ve been told is there’s just a great sense of relief. Everyone is very happy for her and Kim is relieved. This has been a very stressful time, so it’s very exciting for everyone.”

Well, as much as I dislike Kim Kardashian and the Kardashian clan, I’m glad to hear that she’s ok and that her entire family’s been supportive of her. I’m not sure how long that will last, considering that there have already been rumored fights about the baby’s name and how she will make her public debut.  Whatever it is, you can bet that Kris Jenner will win the battle in the end – her hard work has finally paid off.

What do you think about Kim’s excitement over the arrival of her daughter? Are you looking forward to seeing the baby on TV? Or do you simply not care? Let us know in the comments.