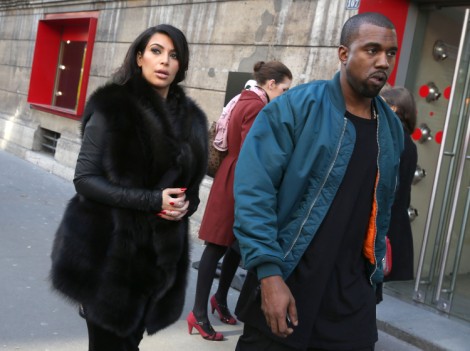 I thought the baby would be born before people criticized the reality star for setting unsavory examples but Peta’s jumping the gun on the issue of fur. Kim Kardashian is currently strutting around Paris with Kanye West for fashion week. She’s a fashionista, remember? What’s hilarious is that most of the designers she’s falling over probably denied her clothes during that embarrassing shoot for Elle magazine a couple months ago. Regardless, she’s there and she’s intent on looking the part – which for Kim means wearing a big ‘ole fur.

It’s like she wants Peta to comment, right? Well, of course they did and they ripped in to her pretty bad as they like to do. PETA spokesperson Wendy Wenger basically said she was a person void of social conscience and she was going to pass that charming trait on to her fetus through the placenta. She went on to say she was already setting a “cruel example” and that she’s just a commodity. At least it wasn’t another flour bomb. Imagine how that would have looked in the fur!

I’m not a fan of fur but I’m not in the mood to soap box right now. I understand why people have them. Kim obviously likes it and she’s perfectly content to keep taking shit for it which is good for gossip since I like the occasional flour bomb story.

Fur asides, what do you think of Kim Kardashian’s Paris Fashion Week ensemble? She looks straight up Cruella de Ville, right? From the black on black to the crazy ruby red nails. She just looks like a character. That’s the thing with her. She never wears the clothes. The clothes wear her. And she was doing so well! She needs to go back to white. She looks so good in white.

What do you make of the Peta/Kim Kardashian argument? Does it have a point? Is Kim already setting a shitty example?