Kim Kardashian Blacklisted By Top Designers, They Don’t Want Her Wearing Their Clothes! 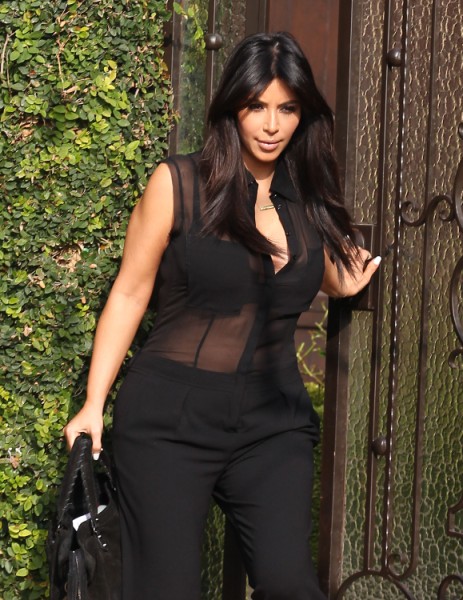 So does this explain the chicken suit getup and the sheer baby bump revealing tops? She just couldn’t find anyone else who would give her something different to wear? I know it’s not Chanel or anything but the Gap has a pretty decent maternity section… just saying. They accept everyone at the Gap – even if you’re not technically an It Girl – which just happens to be Kim Kardashian’s problem at the moment.

Stylist, Nicola Formichetti, came out with the surprising story that he had a difficult time dressing the reality star for a recent shoot for the latest edition of Elle magazine. Kim Kardashian’s baby bump had nothing to do with it (before you ask). Nicola revealed top designers refused to lend Kim clothes because of her unmodel-like proportions and the fact that she isn’t an It Girl yet. What the hell does that mean? I get the fact there might be some snobbery over her curves but if Kim Kardashian isn’t an It Girl than I don’t know who is. They must mean It Girl in the fashion world which, as I’ve loved to point out, she most certainly is not. Bless her heart she and Kanye West try so hard though.

Naturally these words created a shit storm so Nicole backtracked and Kim tweeted about the shoot trying to make everything seem normal and wonderful. Apparently now there were loads of options for our Kimmy on that day but I have a hard time buying it. The ironic thing about this whole situation is the fact that the Kardashians consider themselves these up-and-coming designers with their Sears collections.

So… should we feel bad for sweet little Kimmy? I’m not gonna lie. I kinda do. That must hurt to go to a fashion shoot and hear that designers won’t lend you clothes because they’re afraid your body will make them look like shit. These designers would have to alter and rework and, apparently, Kim isn’t worth the trouble. That’s shocking to me. She’s one of the most photographed women in the world. She has legions of crazy fans ready and willing to follow her every lead. Isn’t she every enterprising designer’s wet dream?

Can you believe this sort of snobbery took place at the Kim Kardashian fashion shoot? Do you think the designers have a point or are they not thinking about the millions of everyday women who have curvier figures like Kim?