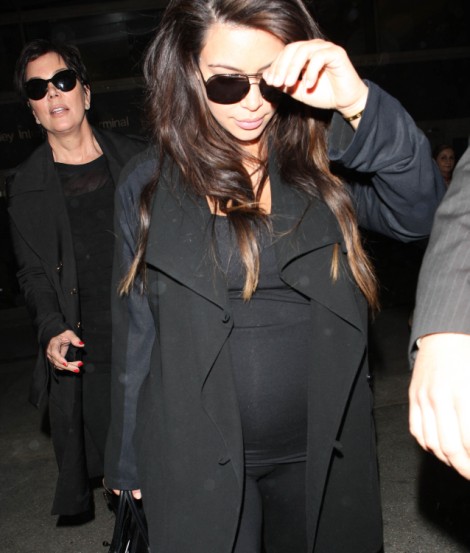 At first I just laughed at this story because I didn’t quite get it. Does Kris Jenner hold this much power over the Kardashian clan? Maybe to some but not so much to others? Clearly, Khloe and Kourtney laugh whenever their overbearing mother tries to butt into their lives but Kim Kardashian seems to just roll over and take it. It’s been a little less than a month since the world has caught a glimpse of its favorite reality princess. Could she really just be enjoying motherhood that much or is Kris forcing her to stay hidden?

And, yes, money is the core of the story. According to Radar Online, Kris is keeping Kim indoors until she secures the North West baby pics deal. Kris thinks if the paparazzi get pics of Kim post-baby then that will drive the asking price down on the cover. Kanye West planned to take Kim to the Beyonce show last week but Kris was all “Hells to the no!”. So, obviously, Kim took her mom’s side over Kanye’s.  Poor dude. That’s got to be getting old right about now.

So, does Kris have a point? I’m not too sure. Yes, seeing pics of Kim at her favorite yogurt haunt might ruin the surprise for me but I have no doubt magazines will shill out the cash for pics of that little baby. I just don’t know what’s taking them so long. We’ve mentioned this before but Kate Middleton is due any day – some even say this weekend. If Kim and Kanye don’t release pics for next week then I doubt they’re doing it at all. The royal baby will be stealing all the thunder for the next 20 years at least. So Kim’s window is getting smaller and smaller but that also means her forced solitude is getting shorter and shorter. At least she has that going for her.

Is Kim Kardashian hiding to drive up the prices or is she just enjoying her time with North? It never can be as simple as all that, can it?