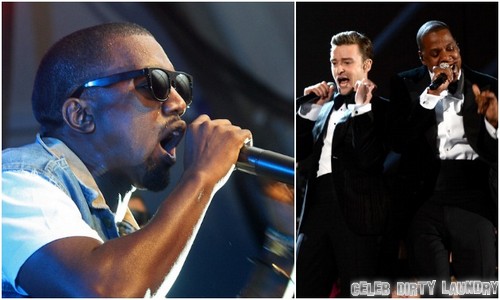 On February 23rd, Kanye West took the liberty of laying into Justin Timberlake and Jay-Z’s new song Suit & Tie. It wasn’t so much Jay-Z that he wanted to lay into, but Justin instead. Still, he started a bit of a war of the words with Justin — and it’s not looking pretty between all of the parties involved.

Now, it appears that Justin has responded to Kanye’s diss on the most recent episode of “Saturday Night Live”. TMZ reports:

It happened when JT was performing ‘Suit and Tie’ with Jay-Z last night — the singer changed the lyrics from “Aww, s**t so sick, got a hit and picked up a habit” to “my hit’s so sick got RAPPERS acting dramatic.”

It’s not the biggest feud in the history of music, but it is a bit of drama, no? We’re guessing that Kim Kardashian and her baby’s daddy won’t be inviting Justin Timberlake and Jessica Biel to the wedding? What do you think? Hit the comments and let us know your thoughts!