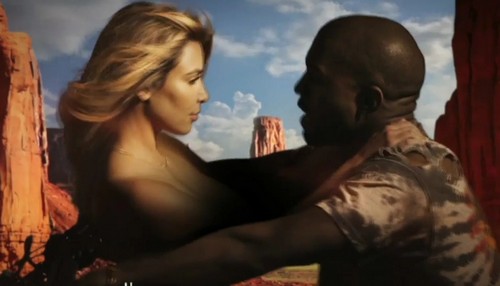 Was Kim Kardashian‘s body digitally altered in Kanye West‘s ridiculous new music video for ‘Bound 2’? Since the video reveals quite a lot of Kim’s body, several eagle-eyed viewers have noticed that her upper torso looks suspiciously thinner than it looks in real life.

Oh, but Kanye wouldn’t dare. He loves Kim for exactly who she is, doesn’t he? At least, that’s what he keeps saying. I mean, he wants her to be a famous movie star with a star on the walk of fame. That must be his reason for creating this ridiculous and second-rate sex tape/music video that is basically two minutes of Kanye and a topless Kim grinding on his bike against the fake background.

That being said, it is VERY obvious that Kim’s body has been digitally altered. Yes, she’s lost a ton of weight since giving birth, but if you look at any pictures of her upper body from the side view, you can see that she still retains her curvy figure. But in the music video, her body looks like that of a Victoria’s Secret supermodel’s. And I’m sorry, but Kim ain’t no model, and she certainly hasn’t  got the body of one.

So who was responsible for this change? I’m guessing Kim requested the change, and Kanye was only too willingly to provide it. Kim’s already sick of people calling her a whale, and she probably thought it would be a good idea to present herself as a thin waif. How she thought she could get away with that, I have no idea. The alteration is glaringly obvious for anyone who’s ever seen a candid picture of Kim, but I’m guessing Kim and Kanye were too busy basking in their own genius to worry about what the plebeians will think.