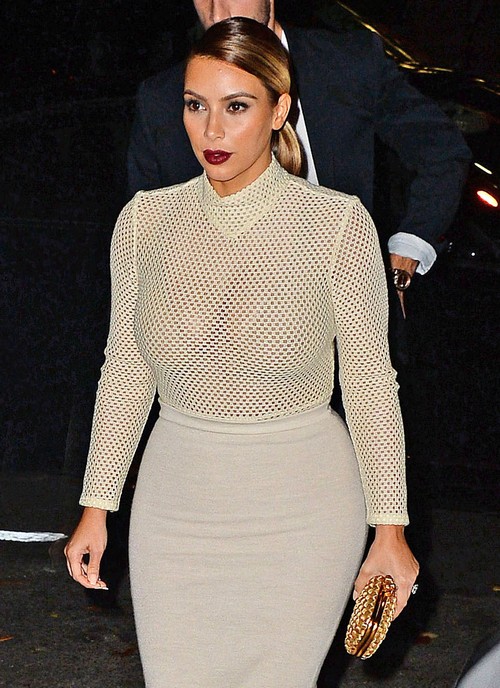 Oh, Kanye West. How you entertain us, constantly living in the shadow of your own greatness, always trying to convince us that Kim Kardashian is an equal to you. His latest attempt at endearing Kim to the world is pretty hilarious, especially as he decided that he would pretty much make her second sex tape. Well, it’s not a ‘sex’ tape, per say – but she’s topless and straddling Kanye in his new music video ‘Bound 2’, so it could pretty much pass for a sex tape.

The whole video is an exercise in ridiculousness, with horrible, cartoony lighting, the non-existent chemistry between Kim and Kanye [even though they are in luuuuurve]. Kanye debuted the clip of the video on the Ellen Degeneres show, and it begins with Kim’s half-nude post baby body sprawled on Kanye’s bike. Then, Kanye begins to sing, “One good girl is worth a thousand b–ches.” That  leads to them making out, which takes up a disproportionately large portion of this video.

An ‘insider’ [cough, we see you Kim] tells US Weekly of the video, “Kim looks beyond gorgeous. It’s very artsy, very beautiful.” Yes, because nothing says artsy like fake backgrounds and a topless women. Also, I’m sorry, but the plastic surgery on Kim Kardashian’s face is more apparent than ever. Like, what are those lips? Seriously, the woman needs to tone it down.

Of course, even though it’s raunchier than normal for a Kanye video, when asked by Ellen if he felt it was ‘dirty’, he replied, “No, I’m not as concerned with the idea of profanity or nudity; it’s more the messaging behind it. [North West] going to be in the real world, so she’s going to hear things and see things. I think she’s gotta be prepared for that.” Kanye also starts praising Kim, and reveals that she’s the love of his wife, and he’s trying to control himself from any jump-on-the-couch moments.

Oh goodness, please don’t. The delusion is strong with this one. Remember how he wanted Kim to have her star on the walk of fame? It looks like he’s single-handedly trying to make that happen by casting her in music videos. And don’t be surprised if he starts using his influence to land her in more Hollywood films as well.