Kim Kardashian NOT Getting A Star On The Hollywood Walk Of Fame – Spokesperson Says “NO WAY!” 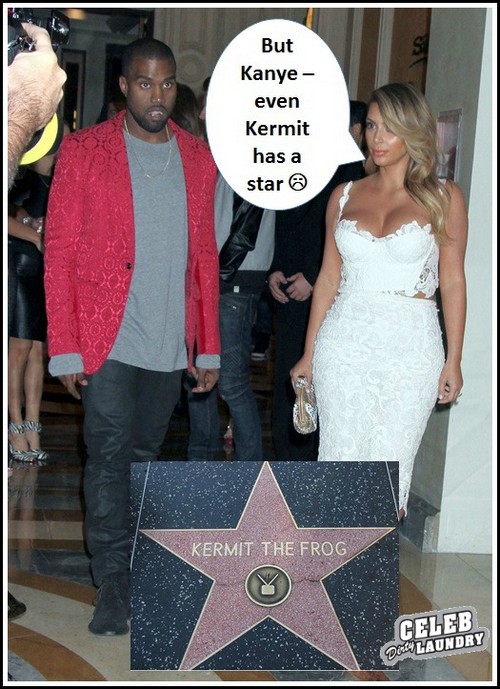 I love it!! Someone isn’t bowing down to the Kardashian Machine! Kim Kardashian and her megalomaniac fiance Kanye West have decided that Kim NEEDS to have a star on the Hollywood Walk Of Fame.  I know, why???  Well Kanye needs some way to make Kim look like a relevant, real honest to goodness celeb, after all he does not date nobodies, right?  So Kanye who is a self-professed, “genius,” has decided that the way to give Kim some “cred”  is to get her a star.

Now generally most media events are kissing Kanye butt to give him what he wants, but a spokesperson, Ana Martinez, for the landmark said, “NO WAY!”  She went on to say, “Reality stars are not giving a performance, it’s just them going through their daily lives and rituals on TV.”  YAY for Ana!!

Kanye is so pissed off he went on Jimmy Kimmel and in between telling Jimmy how smart and special he was he slipped in randomly, “There’s no way Kim shouldn’t have a star on the Walk of Fame.” huh, where did that come from?  Jimmy just ignored him.

Well good luck with the campaign Kanye, cause it doesn’t look like it’s going to happen.  The Walk of Fame did however offer Kanye a bone and offered to consider Kim if she got nominated or won an Emmy, Oscar or Grammy.

What say you CDLers, should Kim get a star on the walk of fame?  For that matter should I? ;-)