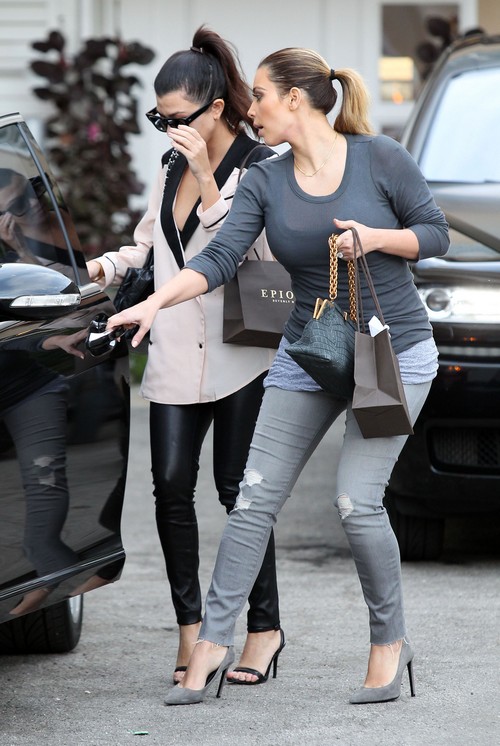 According to a new report from Radar Online, Kanye West is sparing no expense to have Kim Kardashian‘s glam squad on beck and call 24/7. The only problem is – wasn’t she doing this already? She is a reality star, after all, and they’re not exactly known for their lack of vanity. Considering that the E! cameras follow Kim around for most of the day, and when they’re not there, she calls the paparazzi – she probably had this glam squad bit down already.

Anyway, Radar’s source explains, “Kanye has told Kim he will spare no expense to make her look ready to go to a major photo shoot whenever she desires. So, Kim’s hair stylist, make-up artist, and stylist all based in Los Angeles, are on call 24/7, ready to get on a private jet to be whisked to her location.” Ah, it makes sense now. Before, Kim rarely had reason to leave Los Angeles, except to go to Las Vegas. But now, with her new position as Kanye’s fiance and baby mama, she’s expected to travel the world alongside him – and that means that she better look good. That’s what this source is saying, right? That Kanye’s pretty much given her a glamour team to make sure she meets the his ideal before stepping out. We already know he dresses her most of the time, which is the reason for the truly horrendous outfits she sometimes steps out in.

Anyway, is $250,000 [the rumored amount spent on bringing along the ‘glam squad’ on private jets] too much to spend on makeup and hair? According to Kanye and Kim, no. The source adds, “Kim loves that money is no issue ever with Kanye. He never balks at how much money Kim spends. The truth is that Kanye spends a lot more than Kim does on clothes, accessories and cars. They are a perfect match for each other.”

Awww, a match made in heaven. Two sycophantic, narcissistic celebrities who have no value for money, love playing dress up and posing for the cameras. It’s almost enough to warm the heart.