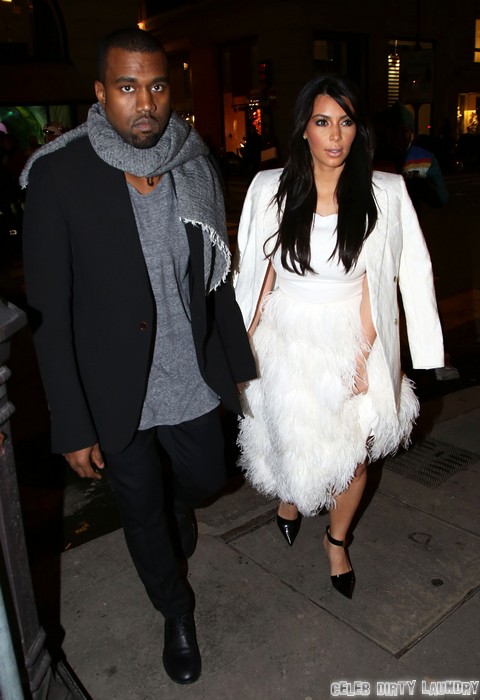 When Kanye West announced that he’d knocked up short-term girlfriend Kim Kardashian, a few thoughts immediately coursed through our minds: will the baby get its own TV show? Will Kris Humphries ever let the divorce go through? Will Kim succumb to stretch marks and major weight gain? But a pregnancy means much more than all of that—of course, the most important thing for parents to discuss is their baby’s closet! Kim and Kanye are both couture whores, and so it’s no surprise that their baby will be born straight into a Chanel onesie, and that their diaper bag will be an Hermes custom purse. (Speculation only, but I wouldn’t put it past them!)

Kanye has made one crazy order: no hand-me-down clothes form two-time mama Kourtney Kardashian! A source reported to National Enquirer, print edition February 25, 2013, “He told Kim, ‘My kid’s gonna have the very best of everything, always. And that means not wearing anybody’s used crap . . . ever!’” Harsh, especially considering that Mason and Penelope Disick’s hand-me-downs aren’t exactly Old Navy Clearance—Penelope can’t even dress herself, and she has a larger closet than most adults. They don’t know the gender yet, but Kourtney has been saving “baby clothes in a big box to pass on for Kim’s kiddie.” Kanye insisted she give up the dream and get rid of it!

Leave it to the privileged Kardashian family to not consider baby health or parenting style. Kris Jenner has proved that pure exploitation kind of works: none of her kids have killed anyone, or done major jail time. So I guess that makes her a successful momager? We’re pretty terrified to watch Kanye and Kim impress their values on an innocent baby, and even more scared for that baby to grow up. Excessively wealthy, spoiled teens turn into reckless drivers and druggies! Do you think Kimye’s baby is destined for failure, or will they pull their heads out of their designer closets long enough to be good parents?