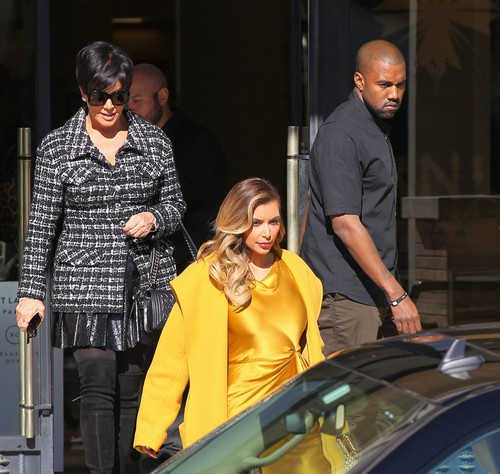 It’s kind of funny to think that for better than half of this year, technically Kim Kardashian has been homeless, isn’t it? The $11 million home that she will eventually share with Kanye West has been under renovation for months and so Kim moved in with momager, Kris Jenner for a few months after the birth of North West. Kanye tagged along for awhile but eventually left because he couldn’t stand being under Kris’ thumb. The conflict is one of the reasons that the couple spent Thanksgiving in Miami and according to the Jan. 6th print edition of In Touch magazine a big move is in the works.

Kim is getting ready to move to Paris with Kanye and the baby in the early part of the new year and it’s a jump that has Kris fuming. She is used to totally controlling everything that Kim does and in the last several months Kris has watched as her main cash cow has started listening to Kanye instead of her. Apparently this potential move has been causing huge fights between the two. Kris has played the family card, saying that she doesn’t want her daughter and grandchild leaving the country, but in the end it’s really about money and even Kim is bright enough to know that.

I almost feel sorry for Kim because she doesn’t seem to even realize that while under Kanye’s control and direction her Q rating has dropped like a rock. Before she was that annoying girl made famous by a sex tape. Now she’s pegged as a lousy mom with an obnoxious baby daddy and horrid fashion sense. At least Kris seems to realize that if she loses Kim completely the family business is circling the drain. At the same time, I can’t really blame Kim for not wanting to live with Kris, can you? Tell us your thoughts in the comments below!