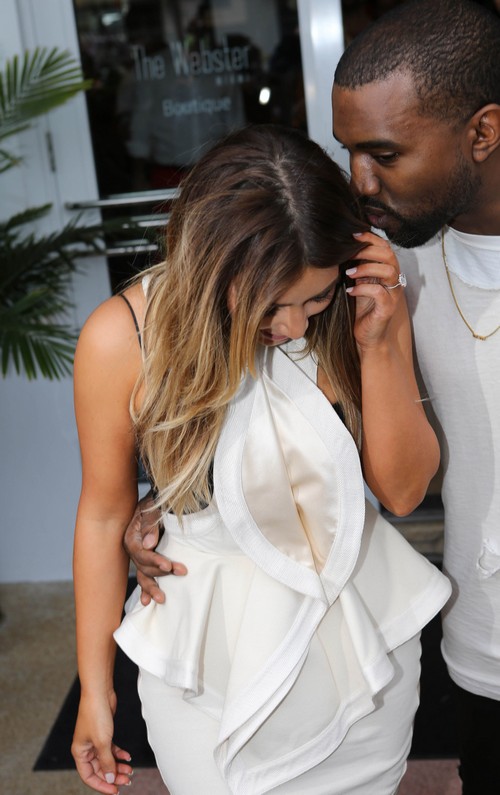 Remember when Kim Kardashian used to babble about how close her family is and how much the extended clan means to her? The Kardashians and Jenners seemed like a tight knit group if nothing else when they popped up on their faux reality show celebrating holidays. I have to admit, I almost kind of miss the self-absorbed Kim that seemed to at least really love her sisters, don’t you? Instead we now have a chick that is completely under the thumb of her baby daddy, Kanye West.

Most new moms can’t wait to celebrate their baby’s first holidays surrounded by family but not Kim. Thanksgiving came and went with Kim and Kanye in Miami, far from the traditions back in Calabasas that I bet Kim never imagined she would want to miss. On a day when most people take a moment to take stock of their lives and at least acknowledge what they’re grateful for, family wasn’t a priority for Kim. Instead she was gallivanting with Kanye while nannies cared for North West, as usual.

Kanye seems determined to convince the world that Kim is a bonafide star in her own right, destined to land on the cover of Vogue. He is single-handedly trying to revamp her image and the first step in doing so is to separate her from her fame whoring family. Unfortunately what Kanye doesn’t seem to understand is that Kimmie will always be the chick that shot to fame for allowing a one-time rapper to tape her as she faked her way through a homemade porn tape. They don’t give out stars on the Hollywood Walk of Fame for that, not yet anyway.

At this point if Kim and Kanye went to Kris’ even just for dinner it no doubt would have been quite an awkward experience because she is on the outs with everyone. Kim hasn’t exactly supported Khloe Kardashian through her messy split from Lamar Odom and Kourtney has serious issues with Kim’s parenting. Then there’s Kris Jenner who has to hate that Kanye is now controlling her former cash cow! We won’t even mention Bruce Jenner who hates Kanye and has been vocal in public about it. My guess is that staying away was probably a whole lot easier for Kim, don’t you think? Tell us in the comments below!

Kanye West and Kim Kardashian do their own version of ‘Black Friday’ shopping in Miami, Florida on November 29