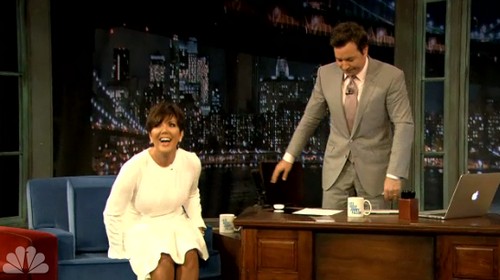 Oh, it’s just another manic Wednesday in the Kardashian household. And Bruce Jenner is to blame. A month or so ago, while Bruce was still eating plastic surgery and tears for dinner, he appeared as a guest on Late Night With Jimmy Fallon. The Olympic gold medallist and part-time silicone addict turned into Jason Voorhees during the interview, and warned Fallon that Kanye West was “really pissed” about the Kardashian jokes. Bruce and Fallon’s rivalry started at last year’s Olympics, where Bruce demanded that the talk show host “stops saying sh**” about his well documented plastic surgery.

Hey now! Lighten up a bit, Bruce. Your fake face is funny.

On Tuesday night, Kris Jenner dropped by Late Night With Jimmy Fallon and profusely apologized for her husband’s behaviour. “Bruce came on your show and he was manic. He totally took over your show,” remarked the Kardashian matriarch. “When he got home, I actually had to ban him from all talk shows.” Jenner also told Fallon that she thought the interview was a success and that she believes Bruce and Fallon “bonded”.

We all know by now that Bruce is hiding a crazy person beneath all that Botox. It’s not uncommon for plastic surgery addicts to morph into that thing from Paranormal Activity, especially when said plastic surgery addict is merely a pawn in a “reality” show’s PR department. We feel for the dude, you know? Aside from being married to Michael Keaton and Lisa Rinna’s love child, Bruce is also stuck with a family of dimwits and carnival freaks.

And they say Amanda Bynes is a lunatic?

It’s a hot year for the Kardashians. Kris got her own talk show, Kim gave birth to North West (yeah, we know), and Bruce lost his mind. Shame…. Let us know your thoughts in the comments below.