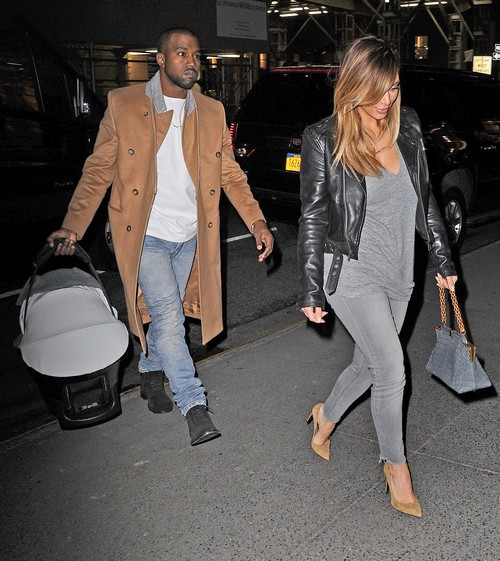 Could it be that Kim Kardashian and Kanye West are beginning to figure out how this whole parenthood thing works? Well, that seems to at least be the message that they are trying to send to the few remaining fans that they have left. Last night they stepped out for a late dinner in NYC with baby Nori. Most parents dare not bring their five month old to a real restaurant, especially later in the day, but that didn’t stop these two from playing the awkward role of mom and dad while they ate.

Obviously North West is well-behaved enough for them to trust that they could survive a dinner without a full blown baby meltdown. Truthfully, her nannies probably have her on a fantastic schedule that runs like clockwork, meaning Kim and Kanye can take her anywhere knowing that their daughter will likely sleep like a trooper.

Have you noticed that nearly every time there is a big faux pas on Kim’s part she chases it with a glimpse of her mothering skills? She’s taking serious heat for auctioning off clothing and accessories in a charity auction to help victims in the Philippines, but is actually keeping 90% of the proceeds. The backlash began and boom, there’s Kimmie in mommy-mode. Are you buying it at all or do you think that every move is part of a bigger and ongoing strategy? Have you seen enough of this family yet? Do you wish that everything Kardashian related would just fade away? Tell us your thoughts in the comments below!

Kanye West and Kim Kardashian have a family dinner with their daughter North in New York City, New York on November 22,