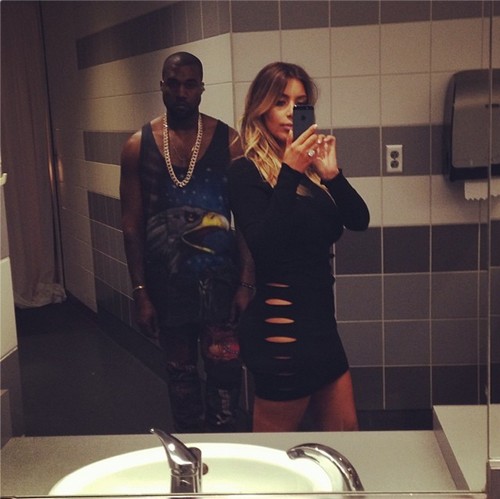 In addition to being her fiance and biggest claim to fame, Kanye West has apparently also become Kim Kardashian‘s unofficial PR person.

While in Kanye’s hometown of Chicago, the couple was supposed to pose for photographs with fans at Giordano’s Pizza. However, instead of posing with fans, Kim decided to go ahead and snub them for a photo-op instead. Apparently, Kanye then took measures to get Kim to apologize and make up for her blunder.

A source explains to Radar, “Kim realized that she offered to take a photo and spaced out when she was on her call. She asked her driver to turn around and come back so she could to apologize to the restaurant. She then posed with stunned staffers before wishing them all well for the holidays.. Everyone who interacted with the couple remarked how incredibly kind they were and how nice it was that Kim came back to take that photo.”

Right, as if Kim came back to the restaurant of her own free will. I guarantee you it was Kanye’s influence, which in this case isn’t necessarily a bad thing. He’s prone to ranting and raving, but he does appreciate his fans and he does know a thing or two about courtesy – at least, more than Kim, who will of course put photo ops above posing with fans.

You know, it wouldn’t be very surprising to learn that this entire thing was just a photo-op to correct Kimye’s bad publicity in the recent months. But I think it’s going to take a little more than Giardano’s staff raving about them to fix that.