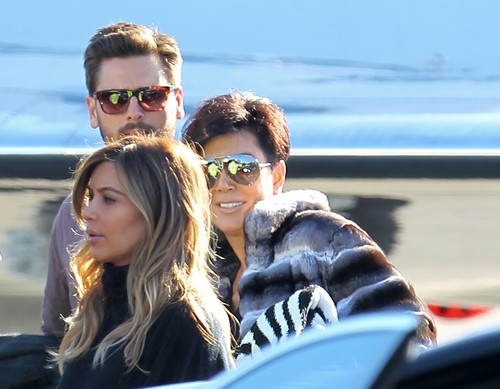 You know its a mandatory family vacation that will be filmed for KUWTK when Scott Disick finally reappears by Kourtney Kardashian‘s side. Lately he’s been MIA in anything that had to do with the rest of her family. That is unless it involved Khloe Kardashian. Then an only then does he suddenly finds the time to be a supportive member of the extended reality TV family. But they aren’t the big fish that’s meant to fry. If this is a mandatory family vacation then where is Kanye West? Technically he should have higher rank than Scott and yet he’s nowhere to be seen. Is it a coincidence that special gift – that nude woman bag – for fiancee Kim has also disappeared? I think not!

Kanye has ditched the Kardashians and he did it for a reason. Sometimes even he needs a break from their famewhoring. Why? He learned the hard way that those kind of people invite nothing more than backlash. Take his gift for instance. That poor man thought people would finally start his genius and all anyone ended up doing was mock him. He blew thousands of dollars on a handbag from hell. That’s just funny!

So while the Kardashian family is bringing their entourage of make up artist, for when they “accidentally” get caught by the paparazzi, Kanye is supposed to be in LA by himself? No, no, no. Kim turn the plane round right now. This smells like a trap and if she want to be one of those women that allows things to go on behind her back then she better be getting bigger and more expensive gifts in the future. If not then turn the plane around. Leave the family’s business of self-promotion just for a while and keep watch over the fiancee.  Amber Rose claimed you took him from her and how you’ll get a man is how you’ll lose him. There are plenty of other almost ‘perfect bitches’ without the Kardashian family looming in the background. Don’t make him choose one of those women!