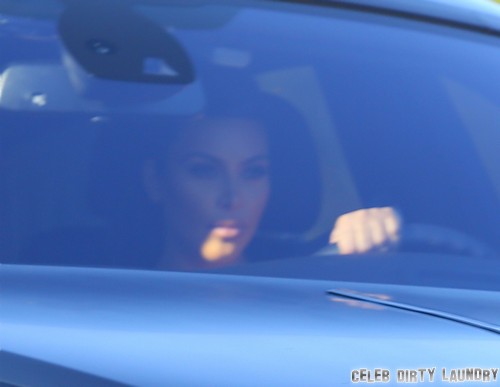 I guess Kanye West really would rather prefer to be a baby daddy than Kim Kardashian’s boyfriend! It has been glaringly obvious that these two have been on the rocks for, well, the majority of Kimmie’s pregnancy. Let’s face it, Kanye loved the idea of being with Kim, the dirty video whore that looked good on his arm. He wasn’t looking to be a father with a drama queen girlfriend who has an attention seeking problem. That wasn’t his agenda.

Kanye showed up late to Kim’s baby shower last weekend looking like it was a funeral rather than a happy occasion and he was out of there fast too. According to a snitch for MTO, Kanye was on a quick flight to Hawaii where he’s either working on his music or frolicking on a beach with his next little protege. Either way, he’s in no hurry to return to L.A. And he supposedly ended things with Kim before hoping that flight.

We’re told that Kanye left Kim in Los Angeles shortly after the baby shower. And it’s not clear if he plans on returning.

The pressure from the CAMERAS isn’t the only issue. Kanye’s facing a great deal of public scrutiny over his upcoming album. The insider told MediaTakeOut.com, “Kanye is now in Hawaii, I think he’s working on music. But I also think it’s over for him and Kim.”

Every time Kanye has to see Kim it’s harder to pretend he wants to be there and she has made it very clear that she’s not about to change her lifestyle for him. Meaning, she intends to parade every moment of her life on camera still and Kanye just isn’t down with that so he pulled the plug. We’ve also been hearing that Kanye has no intention of being in the delivery room when his daughter is born. Do you think he’ll show up at the hospital or even be a part of this kid’s life, or is his contribution going to be strictly financial? Are you surprised that this mess of a relationship seems to finally be over? Tell us your thoughts in the comments below!

Kim Kardashian looking none too pleased driving over to Khloe’s house June 5th – What do you suppose she wants to get off her chest?