Kim Kardashian Fires Back at Katie Couric after the Reporter Skewers her Family Name! 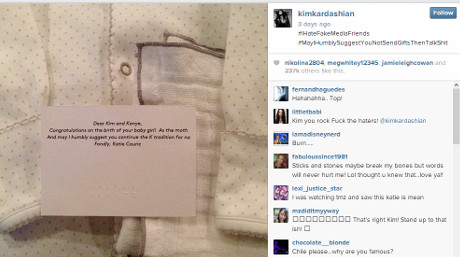 Kim Kardashian has been known for being able to ignore the media’s scrutiny, but the words of one celeb have really irked her and sent her over the edge. Hardworking Katie Couric was quoted with hating on the Kardashian brand name, saying that she can’t believe they’re so famous! “I don’t understand – why are they so famous?” Katie was quote with saying. “I think it’s mostly teenage girls that are interested.”

Kim can’t take it anymore! She bitch slapped one of America’s most beloved — albeit sort of annoying — journalists by taking to Instagram and letting Couric totally have it. She hurled several hash-tag bombs, posting, “I hate fake media friends. May I humbly suggest you not send gifts then talk sh*t,” along with a photo of Couric’s present to Nori. The card Katie allegedly sent makes absolutely no sense.

Reality show addicts speculate the Kardashian empire is on a downward spiral and headed towards ‘Area 51’. Kim’s boyfriend, Kanye West, is wondering how the hell the paparazzi knew his exact whereabouts when taking baby North West to her first doctor’s visit. He’s also humiliated by the BOOS that roared his way after being flashed on the jumbotron at a Los Angeles Dodgers baseball game.

Doesn’t Kim know Katie Couric didn’t even send the gift, her intern did. Someone tell Kim, please just go somewhere, care for North, and try to convince Kanye to help her raise the baby. All of her ‘media friends’ are fake! Her mother is a ‘fake media friend’ if that’s the case. What do you think? Is Ryan Seacrest continuing to support their empire because of that wobbly ass?