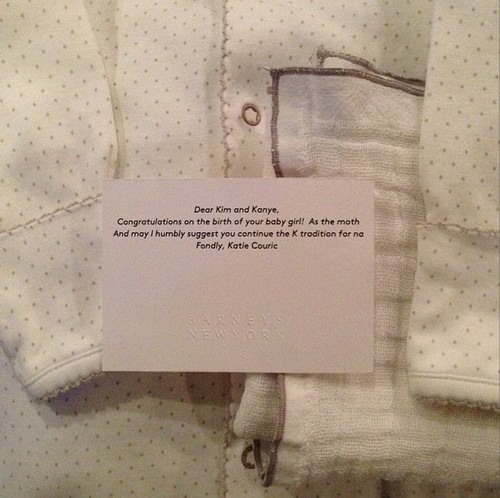 Katie Couric usually stays pretty neutral on most topics, so it was definitely an unusual departure when she was quoted dissing the Kardashians, albeit still in a pretty mild manner. Couric was quoted as saying, “I don’t understand — why are they so famous? I think it’s mostly teenage girls that are interested.”

However, Kim Kardashian has clearly not taken those comments well, since she’s branding Katie a ‘fake’ for sending her a baby gift while saying these kinds of comments in interviews. And you know what? For the first time, I actually don’t blame Kim.

I completely agree with Katie’s comments, and I can never really understand why the Kardashians are famous either. But with that being said, you can’t send someone a gift only to shit talk them later! Kim posted the image of the congratulatory card from Katie, which read, “Dear Kim and Kanye, Congratulations on the birth of your baby girl! And may I humbly suggest you continue the K tradition for the name. Fondly, Katie Couric.”

Under the picture, Kim posted a caption reading, “I Hate Fake Media Friends. May I Humbly Suggest You Not Send Gifts Then Talk Sh*t.”

I think Kim’s comments are completely valid and understandable – but also, sucking up to reality stars that they might not necessarily like is pretty much in the job description of news anchors, especially ones that have to interview these ‘stars’ on a regular basis. Yes, Katie probably should have thought twice before saying she didn’t understand why the Kardashians were famous, but also – is that necessarily a diss? I don’t even know if the Kardashians would be able to tell you why they’re famous, but coming from Katie Couric, I didn’t necessarily take it as an insult. It was more like a question that no one knew the answer to.