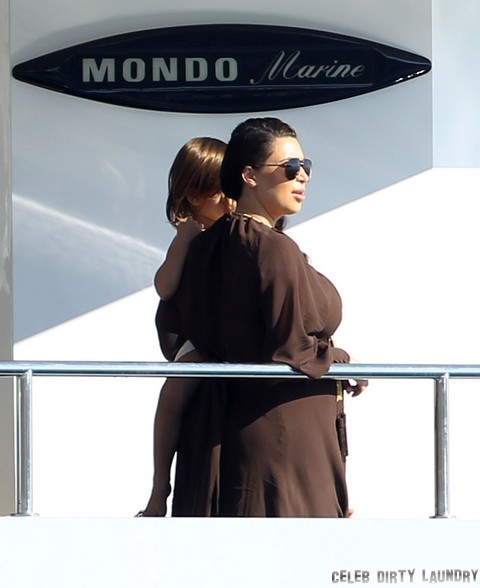 You want to hear Kim Kardashian’s brilliant logic for not naming her child with Kanye West a name beginning with a K? She explains in her low IQ nasal voice on KUWTK, “Our kid, if it’s a K, then they’ll call us the KKK,” because her name begins with a K and Kanye’s name begins with a K. Brody Jenner’s reaction to that? “That’s a little crazy.” For once, we agree with you, Brody.

Seriously, what kind of ass-hat logic is that? My immediate family’s names all start with S, so are we the SSS? Well, logic has never been Kim’s strong point so we’ll let it pass.

So anyway, where is little North West? The royal baby has already come and been photographed, whereas North continues to stay hidden. Kim and Kanye already turned down $3 million for the first photos of the baby, and I’m sure the value’s already decreased now that the attention’s died down a little. So is it possible that Kim’s actually taking Kanye’s advice and not selling the pictures at all? Kris Jenner would probably cry if she heard this. Decades of hard work, all undone by an angry musician with a temper problem. Oh, the horror.

What do you guys think is the reason for the hold up? I still don’t buy that Kim and Kanye don’t plan to debut the baby at all. If Kim hasn’t showed off the baby on Kris’ talk show and she hasn’t sold the pictures when she could have gotten $3 million, then what are the alternatives? That she doesn’t want to sell the pictures at all, or she’s signed some sort of exclusive with a magazine/tabloid/paparazzi that will be revealed in the weeks to come?

Let us know your thoughts in the comments? Do you agree or disagree? And what do you think about Kim’s comments on the KKK comparison?