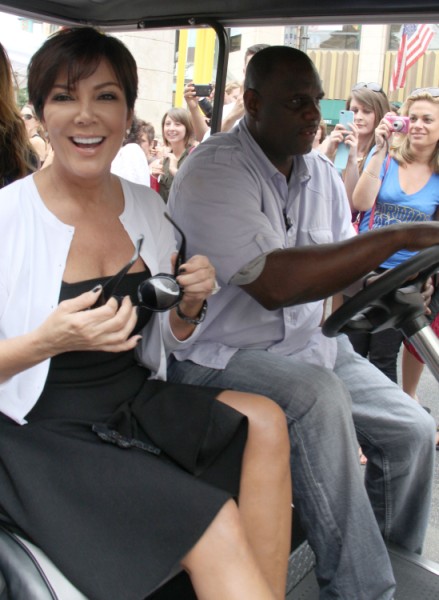 Did you know Matt Lauer was Kanye West’s arch nemesis? I didn’t either. Does anyone like Matt Lauer right now? Dude’s having a rough year. Well I guess Kanye’s hate stems back to 2010 when Matt put him through a grueling interview regarding his “George Bush hates black people” comment and subsequent hoopla. I forgot he said that. All I can remember is Mike Myers’ face though. God, that was uncomfortable! Anyway, so ever since then Kanye’s been pissy towards Matt and now he’s pissy at Kris Jenner because the silly woman can’t seem to keep Kanye’s enemies straight and showed Matt an in demand North West pic while she was a guest on The Today Show.

“He felt extremely disrespected and insulted by Matt and the direction the interview took in 2010…. He was outraged and disgusted that Kris showed Matt a picture of Nori and he is now refusing to speak to her…. Kim called her mother, at Kanye’s direction, telling her not to show any pictures she had of Nori to anyone. Kim was freaking out because Kanye was so angry. Kris just blew her off and promised she wouldn’t,” a source told Radar Online.

I love how Kris just blew her off. Ah! First time parents are so annoying with all their little rules and ideas!

At first I thought this was just another stupid Kardashian drama but then I thought about it. I doubt Kris and Kanye have much interaction. I wouldn’t be surprised if he was annoyed that she’s flashing pics all over town. I wonder if there’s an odd animosity on Kanye’s part that Kris is North’s only grandmother. His mom preferred to stay out of the limelight and was a college professor. Kris is successful but in a trashy sort of way. That’s got to weigh on his mind since his daughter is obviously missing out on getting to know two grandmas.  Do you think that has anything to do with how he handles Kris Jenner? North West pics are going to get out eventually though. Is it unfair for him to freak out at her for showing them off the air to Matt Lauer?