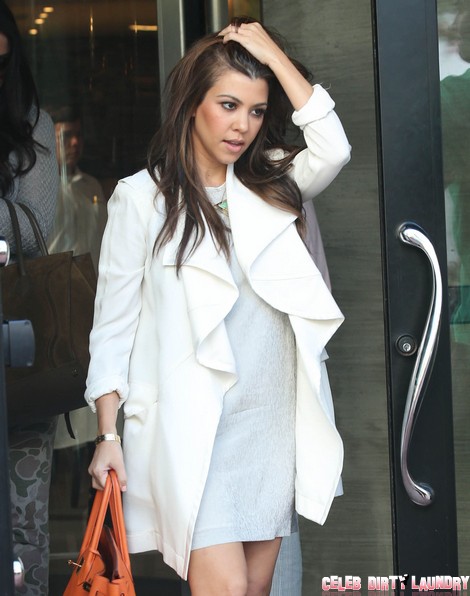 A new season of Kourtney & Kim Take Miami starts this weekend, which means hours of scripted entertainment. You’d think the Kardashian family would have the filming routine down by now, but this time around, Kourtney Kardashian insisted that baby daddy Scott Disick stay at home in LA, rather than move to Miami for the shoot and help her raise their two children! You may be thinking it’s pretty disgusting for a mom to insist her children’s father be out of the picture for the sake of TV, and Kim Kardashian agrees!

While the sisters filmed alone, Kim was forced to step in and play daddy. She may promise to be maternal now that she’s pregnant, but she couldn’t keep up her mommy act while in Miami! “This is annoying,” she said to Kourtney about the solo parenting gig. Kim encouraged Kourtney to have Scott fly out, but Kourtney insisted, “I don’t want him here!” Trouble in paradise . . . literally? Kourtney and Scott have long been on the rocks—no thanks to Scott’s immature playboy attitude! It seems like Kourtney may be practicing for the single life (or throwing us off the scent while they plan a rush wedding?), but Kim wouldn’t have any of it!

“Kim secretly persuade[d] [Scott] to fly in,” Us Weekly reported in print edition January 28, 2013. The sisters “hit some speed bumps” this season, and we’re wondering what their live Tweets will sound like as all the drama unfolds on TV. Will Kim be eating her words, now that she faces the life of an unwed (kind of!) mother whose baby daddy is often away? Will Kim follow in Kourt’s footsteps and refuse to marry Kanye West, or will she jump on the baby wagon and start popping them out in rapid succession, just like her big sis? I don’t see how life with Scott could be in any way an improvement, but I guess Kim couldn’t deal with any extended time playing auntie/daddy! Will she pull it together when her baby comes?