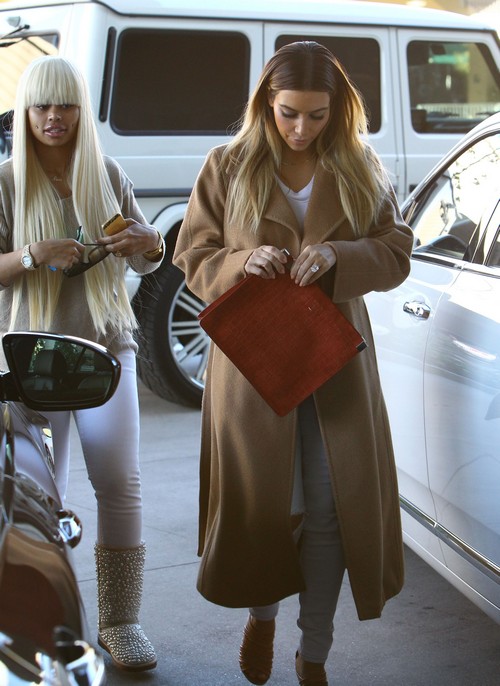 ‘Keeping Up with the Kardashian’ is hemorrhaging viewers. To make matters worse the stars of the show have been using their budget money for expensive and silly crap like their recent Christmas photo. So now the family has to literally the bottom of the barrel to gain back some viewers.  That’s why Kim Kardashian has been making some interesting new friends and Kris Jenner has to resort to throwing her toyboy, Ben Flajnik, in front of her separated husband’s, Bruce Jenner’s, face. As if that man hasn’t had enough to put up with in their twenty year plus marriage already.

Let’s start with Kim. We all know she’s the actual star of the show so no reason to pretend. Kim Kardashian has been hanging out with her new best friend, Blac Chyna. How did this former stripper with no personal claim to fame manage to supplant Kris Jenner’s position as number one fan you ask? Not that there’s anything wrong with strippers or former ones but they don’t generally hang out with socialites. Well, Blac Chyna’s claim to fame is being both a social media sensation (her 1.2 million followers on Instagram love her) and for being rapper Tyga’s fiancee. Blac doesn’t really have an official talent much like Kim Kardashian but they differ by the fact people seem to like Blac.

Look at this way, Kim Kardashian has posted several videos on Keek that we as rule laugh at instead with. Then this bestie comes along and people are interested. Mind you this is the same woman that inspired Amanda Bynes old look during her mental breakdown. She’s a little rough around the edges and I don’t think she’ll get along with any of “K” women’s decor, but they need her. She has to stand in as a replacement for Khloe Kardashian. With the divorce going on, Khloe is too depressing at the moment to be entertaining.

Although I hate it whenever the original cast gets recast; you got to keep the money train rolling! Look at Bruce. There he is doing even more plastic surgery in order to look young when he’s already been exchanged for a younger model. Kris needs a man in her life that could draw in viewership and Bruce is only relevant due to an Olympics that happened over thirty years ago. So sorry Bruce but you’ve expired.

These women have dropped husbands and friends by the wayside since the beginning. Don’t know why family thought they’d be safe!