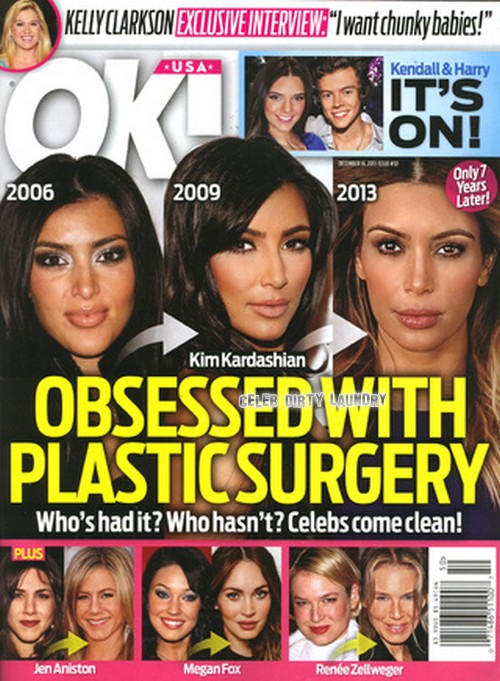 I’ve never understood why Kim Kardashian lies about the amount of plastic surgery that she has had done. I mean some procedures are just really obvious and it’s not like her friends have kept her secrets for her. Those close to Kim insist that she has been getting Botox injections since she was about 20-years old and that she’s smart enough to have started really early so that there won’t be a drastic change in her face at a later age. Instead it has been a gradual process. According to the Dec. 16th print edition of OK Magazine even the experts agree that Kim has had a whole lot of work done – everything from breast augmentation to having her nose thinned.

Kim’s maybe most famous for that enormous backside and while she proved on an episode of Keeping Up With the Kardashians that it’s all real experts agree that she has had the area of skin between her butt and thighs done to make her look toned at all times. Of course this expose was likely prompted by Kim’s own insistence that she has lost her pregnancy weight by diet and exercise rather than undergoing any invasive procedure’s.

Do you believe Kim when she says that she has had very little work done? I mean, why would the experts lie? They have nothing to gain from pointing out that Kim’s body is more of a plastic surgery overhaul than anything else, right? We have learned in recent months to take everything that a Kardashian family member says with a grain of salt because it’s likely a half-truth. Would you have more respect for Kim if we saw her constantly schlepping around with her infant daughter and a few extra pounds? Tell us your thoughts in the comments below!