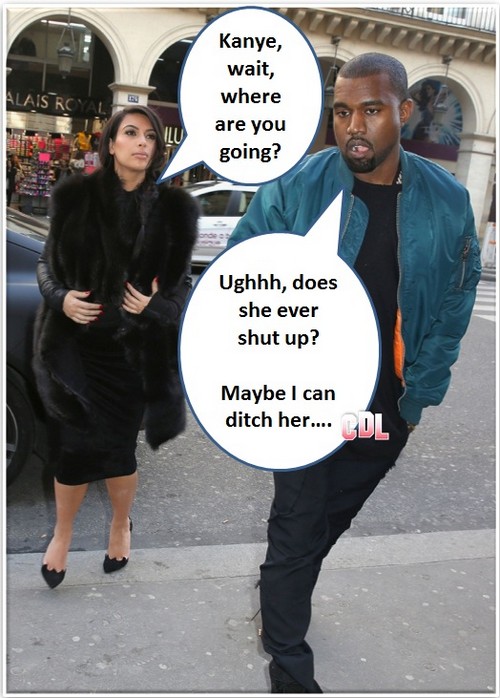 Believe it or not Kim Kardashian and Kanye West have actually been an item for almost a year already! The two hooked up last spring and by the summer she was clearly plotting a pregnancy. I mean, if you have seen her in Kourtney and Kim Take Miami then you have seen all the footage about her stopping her birth control and hoping that she could get pregnant.  By Christmastime, when she and Kanye announced the pregnancy both said that it came as a total shock and maybe it really did to him.

Kanye has never actually struck me as a guy that was anxious to have a toddler running around breaking his stuff and I really don’t see what maternal instincts he could have possibly seen in Kim to change his mind. I think he had no idea that they were trying for a baby. She set the whole thing up and now he’s stuck with a high-maintenance baby mama and her unbearable, attention loving family.

Gone are the days of Kanye putting Kim on a public pedestal. Now he looks miserable and trapped.  Kimmie may not need his money but that hasn’t stopped her from being a burden to the rapper. When he called her his “perfect bitch” he originally meant it as a compliment, now it’s just the truth and he wants to run like hell.

Remember that house they were supposedly buying together? They changed their minds on that brilliant move. If they aren’t setting up house and becoming a real family then they are going in the opposite direction. How long do you think it’ll take before Kanye joins the string of exes that have turned on Kim?  Do you think that he’s happy she is still married so that marrying her can’t possibly be expected of him? Tell us your thoughts in the comments below!