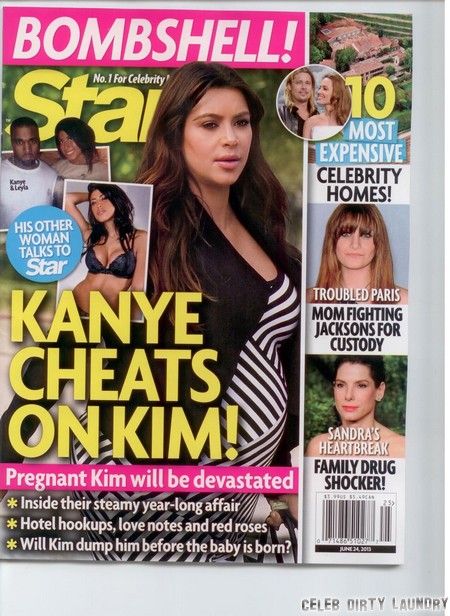 Did Kanye West cheat on the mother of his unborn child? Leyla Ghobadi better have her ducks in a row. The Canadian buxom brunette model Leyla Ghobadi claims in today’s Star Magazine that Kanye West has been pursuing her for nearly a year and she has slept with Kanye West twice since he has been with Kim Kardashian, once while Kim was pregnant. Ghobadi, who looks quite a bit like Kim, says she first met the rapper at one of his concerts when he spotted her in the crowd and asked her back to his hotel.

With all the speculations rumors, innuendos, and accusations pertaining to the Kardashians it is hard to weed out the truth versus fabricated stories in which people are trying to capitalize off the fame and stardom. Call me crazy but I find this story to have a truth factor that we cannot ignore.

Kim is pregnant and ready to give birth any day now and this type of stress cannot be good for her or the baby- but Kim, what goes around comes around! If the adage, ‘how you get him is the same way you will lose him,’ has any truth than this story definitely strikes a chord and hits a home run. Kim, remember Kanye’s ex-girlfriend and model, Amber Rose – well she claimed you were the reason she and the Grammy Award winner called it quits. The affair was precipitated by a string of phone calls and photos that were sent to West by Kim. As I stated earlier what goes around comes around.

Leyla explained her decision to reveal the relationship, Leyla Ghobadi said: “This is going to destroy the Kardashian family. It’s bad. It’s really bad. It’s just embarrassing. But if I were Kim and about to have a baby, I would want to know.”

The opportunities for these women are rare and short-lived. In my opinion any mistress planning to expose a man should have a Plan B as a career backup. Face facts Leyla, this will never destroy the Kardashian family and this will only give them yet another opportunity to spin this betrayal in Kim’s favor and use the pregnancy as a way to gain sympathy for the expecting mother and paint you as the slut who is trying to tear up a reality home.

Regardless of whether Kayne’s relationship with Kim was “just for publicity” or to “increase his fan base” the only loser in this debacle will be you because Kayne will forever be the mother of that baby girl hopefully and will never walk away from her reality fame and fortune for anyone or because of anyone. Are you listening, Leyla? In fact, this cheating scandal will drive up Kim’s business value due to greater publicity!

Do you believe Kayne tried to get Leyla in the sack again this past weekend? Leyla show us proof of the alleged affair or go away forever!! Share your thoughts.