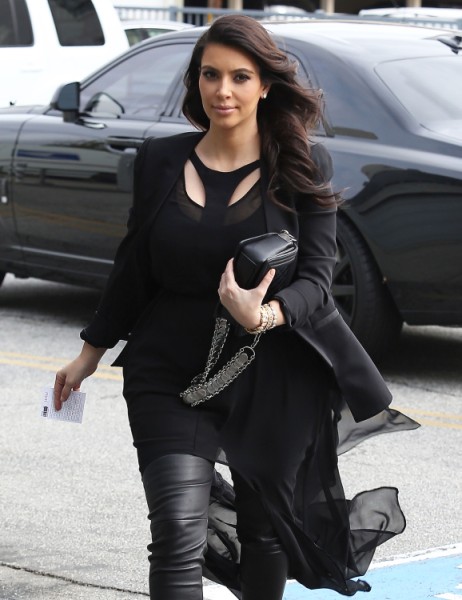 I don’t understand why she keeps doing this to me, I mean us. What the sh-t is she wearing today? I’m not going to disgrace Stevie Nicks by calling this Stevie-inspired. Is she trying to be the worst dressed pregnant woman of all time? Is it truly better to be talked about than to look halfway decent? Jessica Simpson’s muumuus are starting to look adorable as all hell at this point. I digress….

So the pregnant reality star is now a victim of horrible fashion AND divorce bulling. Kim Kardashian exposed her bump and her soul to DuJour about her quickie separation (but not so quickie divorce) from Kris “I got me no lawyers but I got myself a case” Humphries. “Going through a divorce for anybody is devastating and heartbreaking, and then to have to do it and feel like you have to explain what is happening is such an awkward thing. You have to explain your choice to millions of people, and then they’re disappointed. I’m disappointed. Why are they disappointed?”

I guess Kris Jenner informed Kim that since she’s pregnant and the grace period is over she can start bitching about the divorce backlash now. Bad idea. I’m still never Team Kim on this one. You want to know why people were pissed and disappointed  It probably had something to do with the fact that you invited them into your life with a TV show and over-the-top wedding. You can’t put it all out there for people to see and then get annoyed when they have something to say. Don’t play me like that Kim.

But, naturally, sister Khloe Kardashian is coming to her defense and reinforcing her comments. Khloe is encouraging the notion that Kim was bullied about the whole thing. “Kim never had to endure any bullying in her younger years,” she said. “I think to be thrown into a lion’s den with everybody attacking her really hit her hard. It was very painful.”

I hate the fact that bullying is such a buzz word right now. Kim Kardashian is not bullied. She is a reality star who chooses to live her life publicly. And let’s recap. Kim got married on national television in a princess dress. She left her husband 72 days later and then got pregnant with another man’s child before she was officially divorced. That’s worth a comment or two. Suck it up, Kim. Maybe that’s why her ass is so curvaceous. It has nothing to do with genetics, she’s just used to having her cake and eating it too.

Do you believe in the Kim Kardashian divorce bullying theory? Are the Kardashians pulling a bad PR move by looking for sympathy over the split or has the backlash faded?