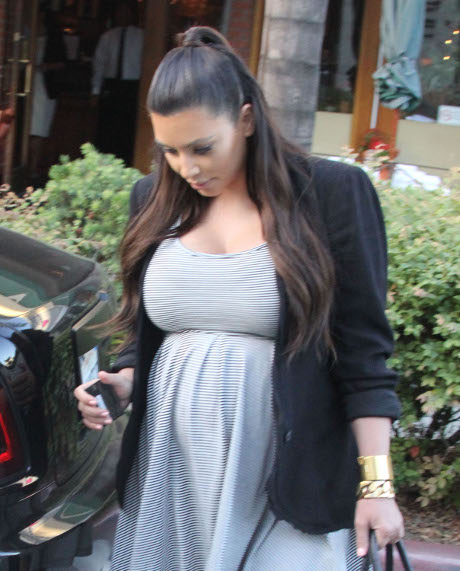 According to a source, Kim finally agreed to make the move after a lot of ‘persuasion’ from Kanye. The source explains, “Kanye asked her for months to consider the move. She finally decided to compromise and make the move for at least three months.”

Why would the move take persuasion, you ask? I mean, she’ll be closer to the father of her child, and probably get a lot more privacy. Isn’t that what someone would want?

Now, now, don’t forget this is Kim Kardashian — and the “Kim Kardashian” baby. How is she going to leverage all the gossip and reporting if she’s not in LA to control it and call the paps? Sure, she could call them in Paris, and she probably will, but it won’t be as effective. Kris Jenner won’t be there to coordinate all the different paps’ arrival times at the hospital, and it’ll be harder to create candid ‘photo ops’.

Of course, Kris would never make it sound like that. The report goes out of its way to make sure that we know that Kris is ‘worried’ about Kim and will ‘miss her’ while she’s away. The source [a.k.a. Kris] adds, “Kim’s a first-time mom, and Kris wants to help her as much as possible. Kim’s also worried — she wants Kris to visit Paris a lot.”

What will Kris do? Her main source of publicity will be thousands of miles away. I wouldn’t be surprised if the Kardashians packed up and moved to Paris for these three months, or at least, visited a LOT. Maybe they’ll do a Keeping Up With the Kardashians Special: Paris Version. One can only hope, especially because Kanye is sure to be absolutely thrilled with that news….NOT.