Kim Kardashian Flies To Paris To Deliver – Is Kanye West Keeping Baby Away From Kardashians? 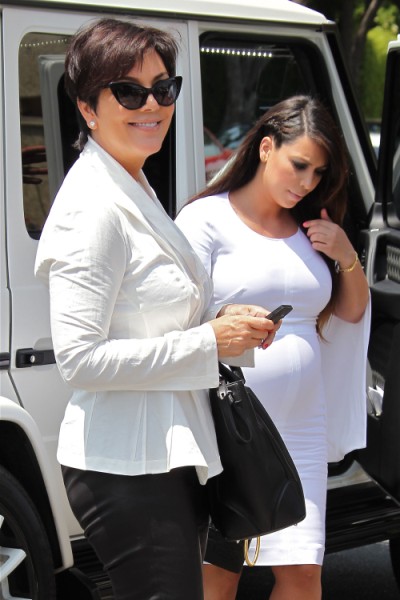 I have this theory that Kanye West is currently starring in his own little reality show called, Keeping Away from the Kardashians. Kim Kardashian was spotted getting on a plane to Paris this weekend leading some to speculate she’s readying everything for the birth. It looks like Kanye was serious about that whole living in Paris thing. Kris Jenner was with her. I doubt Kris would take another European mini-vacay to be around Kim and Kanye. She’s there performing mommy duties for sure.

According to Bang Showbiz Kim has been consulting with docs in Paris and is using this trip to make sure everything is on the up and up for the big date which could be soon. Sources now have Kim’s due date pinpointed to early June which is only of weeks away. So either she’s making a quick trip out there to see Kanye before coming back to Los Angeles to have the kid or she’s just going to stay and relax in Paris the next few weeks with her mom around to keep her company. Either way sounds pretty uncomfortable to me. I know Kanye wants privacy and less signs around to bump his head on but I think it’s kinda shitty Kim can’t have her whole family around when she gives birth. The Kardashians are super tight. That’s got to get to her, right? And now we know she’s taking the baby on tour soon after it is born so will she have any family time at all? There might be a window somewhere in there that allows for a few weeks but that just sounds so tiring to me. All that flying around to make sure your family and your baby daddy feel special will be so draining after you’ve just popped a kid out. Why can’t she just stay in one place and enjoy the experience? I know Kanye’s excited and I know he wants to make this about him and Kim but I can’t help but feel like she’s losing out. Did she get to make any major decisions during this whole process or is it whatever Kanye says goes?