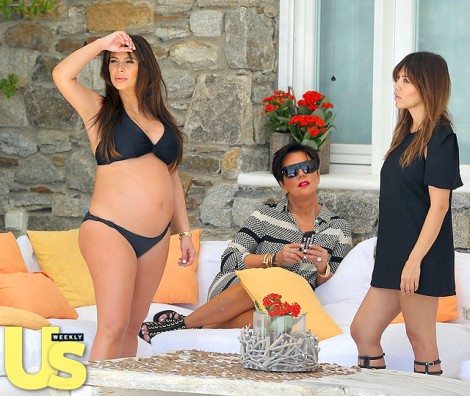 Kanye West is one busy guy and it’s not easy for him to keep that schedule straight. He has the cool, fun things that he likes to make time for and then there’s a whole bunch of obligations that get scheduled in with a few choice words I’m sure. One of those obligations is his baby mama’s baby shower! Since Kim Kardashian’s camp announced that Kanye is confirmed to be there, you know as well as I do he’s treating this like something he has to show up for – or else.

According to Life & Style, on Sunday, June 2nd the festivities will take place in L.A. With longtime Kardashian pal, Sharon Sacks doing all the planning. Kim usually loves a party but I’m pretty sure even this one won’t make the misery princess smile with the least bit of sincerity. I’m not sure who is less happy about impending parenthood, Kim or Kanye, but they sure aren’t spending much time together. He has chosen to spend the bulk of her pregnancy in Paris, recording a new album. His new musical baby is obviously way more important than taking care of the mother of his real child. The couple finally reunited two weeks ago and frankly there has been more anger and hostility from Kanye than anything else.

Supposedly Kim doesn’t even think they’ll be together by the time the baby is born because she is sick of his explosive temper and outrageous demands. Kanye may be confirmed for the baby shower, but it’s still a few weeks away. It doesn’t mean he’s going to show up!

How present do you think Kanye will really be in this baby’s life? Will he be there for the shower or even the delivery? Or will he be doing far more important things on the other side of the world instead? Tell us your thoughts in the comments below!