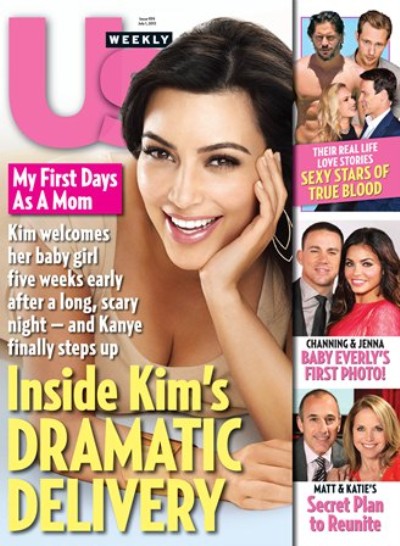 It’s not the picture I expected on the cover of Us magazine this week but at least it’s Kim Kardashian. It seems everyone wants to know when went down during that dramatic five-week early delivery. Kim Kardashian was most likely suffering from preeclampsia, which forced her to go into premature labor on Friday night because her blood pressure was skyrocketing and the baby was in distress. People magazine is telling the same story only it’s stipulating she was only 3 weeks ahead of schedule. That makes more sense to me since the baby was just around five pounds.

And now, after going through the ordeal, Kanye West and Kim are tighter than ever. It seems little Kaidence Donda West’s birth has only made Kanye want to marry the reality star more. That’s usually the case, right? There are probably a lot of endorphins still floating around. But Kim doesn’t care. She’ll take what she can get. The mag goes on to say she’s desperate to have Kanye around her now as much as possible because she’s so freaked out about the kid and her own health. “After discharge she should follow up with blood pressure checks. The condition can cause problems after birth. For the next two weeks, Kim wants Kanye around 24/7. Kim is a bit freaked out, but the baby’s breathing is fine,” a source blabbed.

I actually can’t fault her there. I would want everyone around me too. I remember getting my puppy and finding out she was only like four pounds and I was always nervous I was going to step on her and squash her. So, you know, I can TOTALLY relate.

Will you pick up this week’s issue of Us magazine to learn more about Kim Kardashian’s birth? I’m not gonna lie. The more I read the more interested I become. She’s really raising the bar for Kate Middleton. She definitely just shit on that whole hyperemesis gravidarum episode.