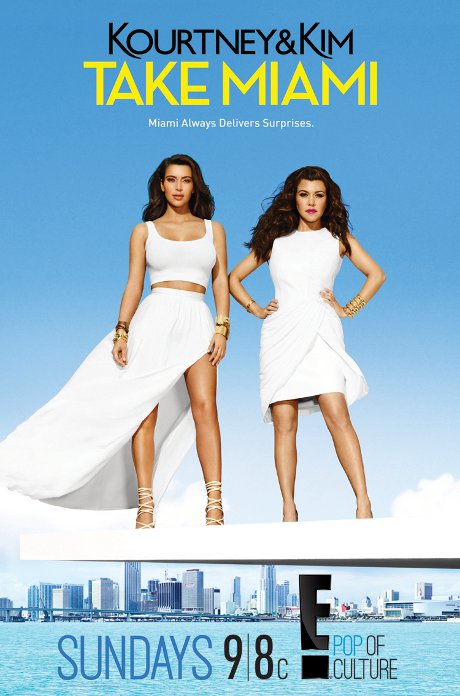 Kourtney and Kim Take Miami will premiere on E! this Sunday, January 20th and, as is always true when the Kardashian sisters are involved, we can expect some major Kardashian Kraziness. And guess what? The Kraziness will also spill over into Monday, as the Kardashians are coming at us full force with a special two-night premiere. How much luckier could we be? I don’t think any more so.

If you want to be completely surprised by the new episodes, then please stop reading here, as I’d hate to spoil the newest Kardashian experience for you. I am a spoiler of surprises, so just be warned.

On Sunday’s episode, Kim Kardashian and Khloe Kardashian are very worried when Kourtney Kardashian arrives without Scott. Why on earth didn’t he come with her, after he made a promise to be by her side? Who knows. *Gasp* What is that lil’ douchey-douche up to now? Him and his games. He’s always up to something, isn’t he? Also on the drama table is Kim’s impending divorce. Khloe and Kourtney want Kim to talk about it and admit to the fact that the whole process — belabored and ridiculous — is troubling her. But she’s reluctant to do so. She’s much more obssessed with being a fantastic parent to her new kitten.

On Monday’s episode, Khloe will get devastating news regarding her fertility, and she takes it out on Kourtney — who’s fertile as a Spring lawn. Apparently Scott manages to find his way to the sister, because Kourtney bashes him for his newest endeavor: car racing.

Watch the sneak peek we have for you below. Tune in to E! Sunday, January 20th at 9pm ET/PT, and Monday, January 21st at 9pm ET/PT for the two-night premiere of Kourtney and Kim Take Miami! Let us know in the comments section below if you’re ready to head on another Kardashian adventure. Or are you, after witness the finale of Keeping up with the Kardashians, ready to take a break from these non-stop reality television stars?