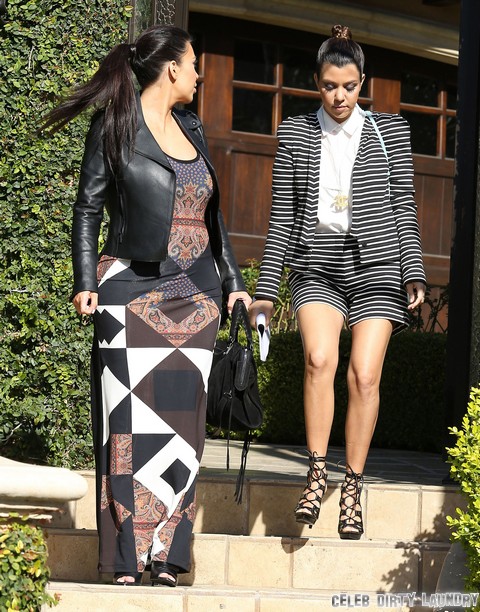 Since his debut on Keeping Up With The Kardashians, Kanye West has been marked as the anti-Kardashian. The rapper is distinctly different, primarily in that he enjoys privacy above all else! It seems illogical that he ever connected with Kim Kardashian, and unlikely that he ever wanted to have a baby with her and settle down! (Proof: The two just sold their Bel Air pad, leaving us to believe there is trouble in paradise!) Kanye has been notoriously opinionated, forcing Kim to abandon her trademark trashy style and replace her pieces with classic neutrals and booty/bust squeezing ensembles. Even pregnant, she admits that Kanye dictates everything that she wears! But his influence is moving outside of her, and is poisoning the rest of the family!

Young, impressionable party boy Scott Disick is reportedly enamored with the rapper, and has started copying his style piece for piece! “Scott is obsessed with Kanye,” an insider told In Touch Magazine, print edition March 11, 2013. “He listens to everything Kanye says, including how to dress.” Photos show Scott copying whole outfits, trading his normal Hamptons prep pieces for leather, chains, and Timberlands.

If there’s one lesson that Scott doesn’t need to learn, it’s how not to commit! Despite having two children together, he and Kourtney Kardashian haven’t made any moves to take their relationship to the next level, something Kanye is excellent at! Sure, Kim is still legally married, but Kanye is forcing her to abandon her entire life and brand to be with him! If Scott follows suit, Kourtney may find herself alone with two kids—all the more reason for her to sprint down the aisle and get everything in writing! Do you think Kanye’s lax attitude towards his baby mama will rub off on Scott? Will he finally tear the Kardashian family apart?