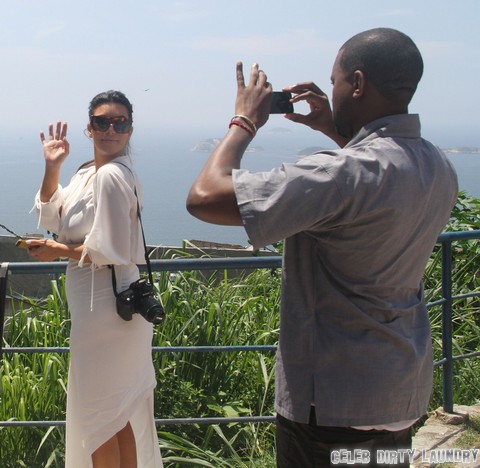 Kris Jenner and Kim Kardashian have begged Kanye West to agree with their decision to name their baby with a ‘K’ to keep the tradition in the family going. Kim has always thought that having the entire family being named with a ‘K’ made them unique, and she definitely wants to keep this going with Kanye, seeing that his name also starts with a ‘K’. So what’s the big deal?! I mean – it’s just a name, right?

Well, we don’t need to be backed up by a source to see that Mr. West has changed the 32-year old drastically; he makes her throw out all her “ghetto” clothes and replaces them with leather outfits, he demands sex at least twice a day, has made Kim put him as her first priority, and now with the baby coming, there’s a good chance that Kanye will make the decisions, not Kris nor Kim. You see, we started seeing signs of a controlled relationship between the two after we found out Kim would not have her baby on her reality show – the same program that ended up making her the successful “businesswoman” she is today.

The Armenian-beauty has already turned down multi-million dollar offers from magazine companies to give them the exclusive rights for the baby photos. You get our point — it’s definitely not the type of Kim we know – so it pretty much goes to show that nobody can touch Kanye right now… not even Kris, who is desperately hoping she gets her way to pimp the baby out with deals from left to right.

One could argue that since Kourtney Kardashian‘s kids were not named after the letter ‘K’, why should Kanye’s kids? But let’s not forget that Kris Jenner only makes big bucks through Kim, not Khloe and certainly not Kourt. Whether or not Kim and Kanye are going to be keeping it Kardashian traditional, it’s uncertain, but one thing we do know is that Kim better not rush into marriage before she really gets to know Kanye. He seems a little crazy in the head.

Pregnant Kim Kardashian and her boyfriend rapper Kanye West continue their Brazilian tour with actor Will Smith in Rio De Janeiro, Brazil on February 10, 2013. The trio checked out another shantytown today called Vidigal, that is situated on a hillside overlooking Rio De Janeiro.