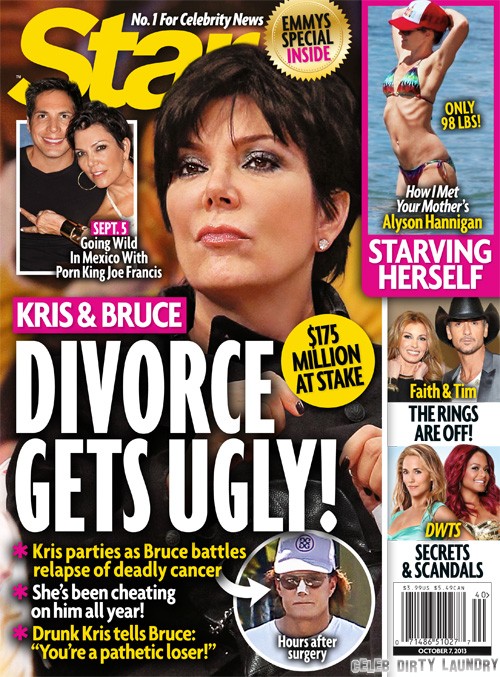 Star Magazine’s latest cover leads with Bruce Jenner and Kris Jenner‘s upcoming divorce. According to the report, the divorce is starting to get ugly and both Kris and Bruce are no longer trying to stay amicable.

The sources also claim that when Kris got drunk, she got into a screaming match with Bruce that ended with her calling him a ‘pathetic loser’. Ouch.

While I don’t necessarily support either Kris or Bruce in this divorce, we all know what Kris is capable of. She’ll probably take her cheating and yelling and somehow blame it all on Bruce.

In other Star Magazine news, How I Met Your Mother‘s Alyson Hannigan has reportedly dropped down to an astonishing 98 pounds by starving herself. This might be because the show’s coming to an end, and to book another job at her age is already difficult enough in Hollywood – she might be feeling the external pressure to stay skinny.

Tim McGraw and Faith Hill, as a staple in the tabloids, are also featured, with reports about how both of them have stopped wearing their rings.

And finally, there’s an exclusive on all the Dancing with the Stars secrets and scandals, leading with Leah Remini and Bill Nye‘s real reasons for joining the show.