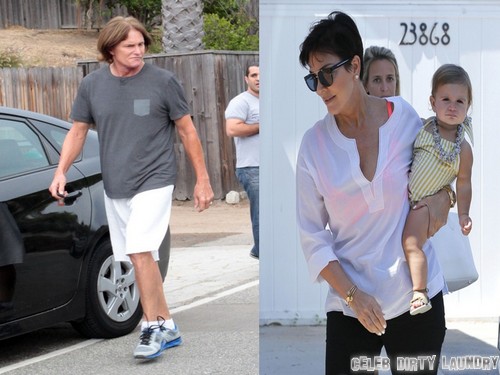 Does anyone believe for a second that Kris and Bruce Jenner are a happy couple? Didn’t think so. I mean we pretty much watched them split up on camera during the Man Cave episode of Keeping Up With the Kardashians and they rarely spend any time together unless they are filming their show. Kris has gotten so used to life without Bruce that she feels single – single enough to ditch her wedding ring more often than not.

According to the Sept. 9th print edition of In Touch Kris did lose her shiz recently when promo pics were taken for her already defunct talk show and they weren’t just right. Kris realized that she was missing her wedding ring and flipped out on everyone because someone should have made her put on her ring! Apparently Kris wants to give the professional image of a married woman so someone needs to insist that she stop drinking like a college kid while giggling and flirting like a teenager!

Anyway, you better believe that those photos were buried and will never see the light of day because Kris will likely pretend that her talk show never even happened. Denial seems to be the coping mechanism of choice so sooner rather than later she’ll blow off any chatter regarding her 6-week attempt at a chatfest. That denial carries over into her clearly failing marriage. I guess Kris really does think that the general public believes the slanted version of reality that she tries to sell to us. Unfortunately the only one that seems to believe the nonsense is Kris when sloshed.

How long before Bruce files for divorce from Kris?  The couple is already de facto separated. We keep hearing about how he lives in Malibu now, not even in the same area as his wife! Tell us your thoughts in the comments below!