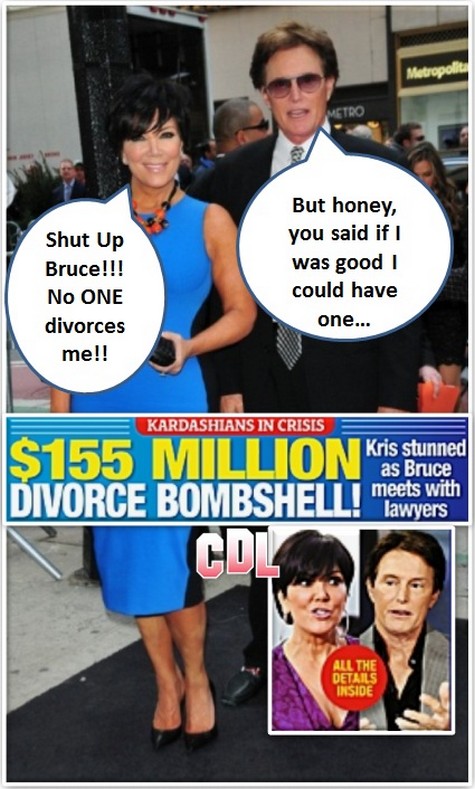 The Kardashians in crisis is not something we’re fond of here at Celeb Dirty Laundry. We like our Kardashians as they are – fame whores with too much Botox in their faces. If the Kardashian tribe falls apart, we’ll turn into nihilistic existentialists without a future, a past, or a present. The cessation of the most shameless tribe this side of the Brangelina brood will send our arteries into high gear and cause us to cease existing as functioning human beings. According to a latest National Enquirer cover, this existential crisis might come sooner than expected. Goodbye Kant and Nietzsche!

The headline reads, “Kardashians In Crisis – $155 Million Divorce Bombshell – Kris Stunned As Bruce Meets With Lawyers.” Poop. Here we were, merrily whistling “Is This the Way to Amarillo” and clicking on our fake beard and boggle eyed glasses, when the news broke of the Kardashian crisis. “Oh Lawdy,” we said. “It’s time,” the men in white coats whispered. Could it be? Could the flat faced Bruce Jenner finally be interested in a divorce from fame whore Kris Jenner? What will happen to his face when he cries, and most importantly, what will happen to his eyes when she decides to rip them out and feed them to her kids? Gory we are, yes we know, but desperate times call for desperate measures! We don’t want our cheesy quips to be devoid of humour! Who else could we then make fun of? Lindsay Lohan? Miley Cyrus? God forbid, June Shannon?  It’s too much for our weary minds!

Okay, we listened to our Aunt Mildred’s old Roy Orbison records, opened the windows, and drank some sweet lemonade. We might have slightly overreacted during the previous paragraph, as this is the National Enquirer after all, a media outlet that, albeit brilliant, focuses on contextomy – using an out of context quote to bring their point across. Perhaps the story was mulled over in the mind of a genius writer at Enquirer? Perhaps the story is not what we think it is?

Be it as it may, a divorce between Kris and Bruce will be one of the hottest media topics in the world. It would be akin to a spotting of Santa Claus’ sister, Rosie O’ Donnell, in New York City. Only time will tell whether this horrid marriage of Botox injections and despotic maneuvers will stand the test of time. We’re still not completely sold on the National Enquirer story, but we are sold on Heather Mills’ and Paul McCartney’s ode to divorce, namely, “Call the media, we’re about to kill one another and have the nastiest divorce in human history!” So, thanks for the heads up, Enquirer.

Do you believe this tale of divorce? Do you think Bruce and Kris might call it quits soon? Let us know your thoughts in the comments below.