Kirstie Alley’s Book Slammed For Being Sick And Twisted! 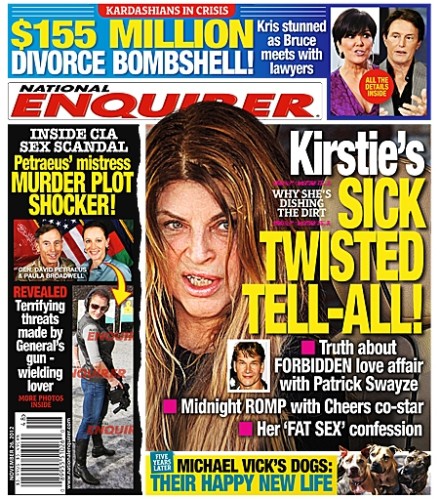 Kirstie Ally’s book, The Art of Men (I Prefer Mine al Dente), is leaving many with a bad taste in their mouth. Branded sick and twisted by the National Enquirer’s cover this week, the book is said to contain many secrets about the former Fat Actress‘ love life. Some stories already making the rounds include Kirstie’s “emotional affair” with North and South co-star Patrick Swayze and a mysterious sex-capade with a co-star from Cheers. Was it Woody? Ted Danson? Norm!? Just tell me! I don’t want to read the book!

I had a huge problem when the Patrick Swayze stories started swirling. He was married at the time the alleged flirting was going on and I’m sure his widow doesn’t appreciate the comments. I understand Kirstie has a book to sell and it is her life but using a dead man to do it is a little off sides. That was pretty sick and twisted to me, at least. Then she said John Travolta was the love of her life. Hello! He’s married! And gay! WTF?

In other Enquirer news, it seems that Michael Vick’s dogs are getting a second lease on life. That piece of shit might have went to jail but I still think that punishment was too lenient. I don’t care if he’s changed. I cannot abide people who hurt dogs! Anyway, seven of his dogs were taken in by decent people and have been certified as Canine Good Citizens, thanks to the work of BadRap – Bay Area Doglovers Responsible About Pit Bulls – which rehabilitated the poor guys.

“When we took them in, the dogs were very stressed, and some even needed serious medical treatment,” said Donna Reynolds, Co-Founder and Executive Director of BadRap.“They were scared and frightened … but now they are all alive and doing well.”

This is amazing. So many people just kill pit bulls because they have such a bad rap but it’s only because horrible human beings like Vick train them to be that way. I’m excited they went to good homes. God, I love animal stories.