Jennifer Aniston Is Finally Pregnant! She’s Having A Girl 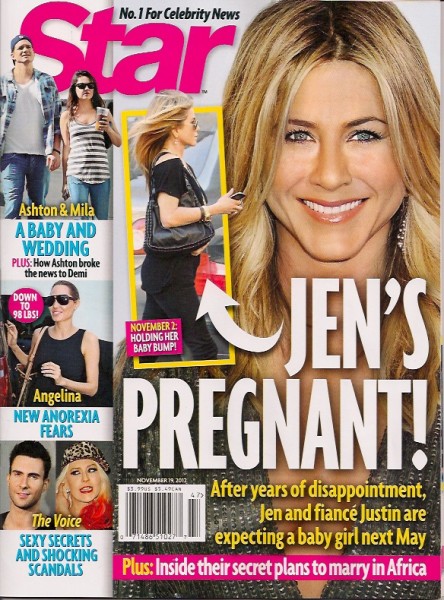 It’s a very pregnant cover for Star magazine this week. Not only is Mila Kunis expecting a bundle of joy with boyfriend Ashton Kutcher (and planning a shotgun wedding) but America’s favorite friend finally has her happy ending as well. Yes, Jennifer Aniston is still engaged to Justin Theroux but she’s pregnant too and that’s the most important part since, just between you and me, Justin feels more like a sperm donor anyway.

“Jen cried tears of joy after learning that she’s having a daughter,” an insider told the magazine. “It doesn’t feel real, but it is!”

But if you’re expecting Jen to start sporting her bump around town like Kristen Bell, think again. She’s keeping everything on the DL because she’s “scared to death that making a huge public deal over her pregnancy might jinx her. It took her years to get pregnant, and she’s aware of the complications that could arise because of her age, so she and Justin have decided to keep silent as they prepare for the baby’s arrival.”

Apparently the baby is due in May and Jen and Justin are planning a wedding in Africa. Again, what’s with the Africa? Stop talking shit! Jennifer Aniston is NOT marrying ANYONE in Africa. It’s sooo not her. Why do the tabs keep pushing this and why am I the only one offended by it? It’s Mexico or bust. Trust. Am I a cynical bitch if I believe this when I see it?

On to a real pregnancy, Mila and Ashton are planning a wedding! I don’t care how much they deny it. That’s a baby bump if I’ve ever seen one. And the magazine reports it can tell us how Ashton broke the news to Demi Moore! OK, I’m hooked. Where’s this magazine? I need it NOW.

And finally, because Jennifer can’t have a cover without Angelina ruining it, the magazine is running a story on the side of an anorexic Angelina Jolie. I can’t really complain about that one. Of all the stories on the front page, that’s the one that makes most sense. Sorry, bitch is skinny.

So what do you think of pregnant Jennifer Aniston? She’s so happy! Should we burst her bubble, I mean baby bump, by being wary of the source? As I said before, I’m not too interested in that story. Jennifer’s been with child more than Michelle Duggar. I just want to know how Ashton told Demi about Mila’s belly. It had to have been over the phone, right? There’s no way he gave that up in person!