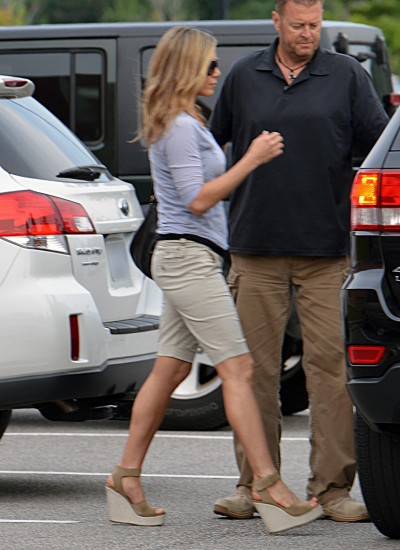 So, like we called it, it was only a matter of time before the Jennifer Aniston pregnant stories filled every tabloid in America. Should she be offended? God forbid Justin Theroux propose to unlucky in love Jennifer without her being knocked up first. Or was that the condition on her end because, haven’t you heard the news? Jennifer Aniston is 43 and doesn’t need to get married to be fulfilled in life! Oh, the Hollywood spin! Whatever the reason for the wedding, Jennifer Aniston’s mom is spilling the beans on the bun in the oven and confirming a shotgun Mexican wedding is in the cards for Brad Pitt’s ex.

According to the National Enquirer (via Celebitchy):

Hot on the heels of Jennifer Aniston’s surprise engagement to Justin Theroux, her mom Nancy Dow dropped a bombshell – she’s going to be a grandmother!

“Nancy said that Jen’s pregnant and that she and Justin would have a wedding soon in Mexico. She’s so beside herself over the news that she couldn’t resist spilling the beans,” said an insider. “Only a few days after Jen confirmed she and Justin are engaged, Nancy squealed to a few friends and family members, ‘I can’t wait – I’m finally going to be a grandmother!’”

An insider says, “Jennifer and Justin are throwing together a shotgun wedding. They plan to tie the knot in one of Jen’s favorite vacation locales, a beach in Mexico, and they’re going to do it before the end of the year. Nancy said that Jen doesn’t want to be showing too much on her wedding day.”

Months after Nancy suffered a stroke in September 2011, Jennifer promised her recovering mom a bundle of joy was coming soon. And while Jennifer banned her mom from her splashy, star-studded 2000 wedding to Brad Pitt, Nancy will be an honored guest at Jennifer and Justin’s nuptials, said the source.

“Justin has been instrumental in smoothing over relations between Jen and Nancy,” said the insider. “He even calls Nancy once a week to see how she’s feeling. He always tells her, ‘Jennifer loves you so much, and so do I.’ Jen knows that her mom’s health is deteriorating. So she’s thrilled to be sharing her wedding and baby happiness with her. Nike Nancy told her friends, ‘A grandchild is the best gift a grown child can give their mother.’”

Who didn’t think Jennifer Aniston would get hitched in Mexico? She’ll probably pull a Pamela Anderson and get married in a white bikini and a captain’s hat she loves it there so much. Hey man, to each his own. But a baby bump to balance the margarita toasting glasses on? Not cute and probably not true. I think Pamela just ruined destination weddings for me.

Check out the pic I posted. The photo agencies have been trying to hype a Jennifer Aniston baby up for the last couple of days with that pic. Personally, I don’t see it. If that’s considered a baby bump, just about every woman reading this is pregnant (myself included). And taking into account this is coming from the Enquirer, we should tread lightly. Jen and her mom aren’t exactly Lorelai and Rory Gilmore, you know? She didn’t even invite her to her wedding to Brad. And it doesn’t seem like Jen’s one to confide to her parents anyway. Her dad didn’t even know she was engaged when reporters asked him. So I’d take this story with a grain of salt. I would love to see her pregnant just as much as the next person. It seems like she’s ready for it at this point in her life and Justin’s got to be down as well. You don’t jump in Jennifer Aniston’s boat unless you want to. She comes with a lot of media attention and a lot of baggage and apparently she’s ready for more!

Do you think Jennifer would tell her mom she was pregnant? I’m sensing there are some trust issues there to begin with. If she is preggo, are you excited for her or do you think she’s rushing into it? And now does it seem like she’s just using Justin as a sperm donor?