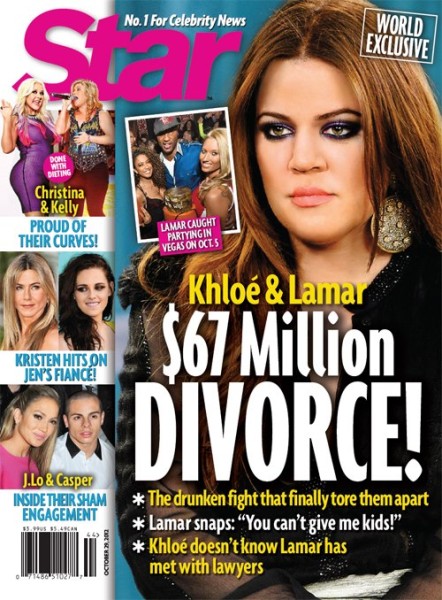 Two Kardashian relationships on two different covers this week. Lucky us! Move over Kourtney and Scott, there’s a new Kardashian split story courtesy of Khloe Kardashian and Lamar Odom. Apparently Lamar is so disgusted Khloe can’t give him children that he’s tossing her ass to the curb, and perhaps cheating on it as well.

Their latest fight over infertility left Khloe seeking out her sisters for comfort in Miami and Lamar sulking off in Las Vegas. An angry dude alone in Las Vegas? That can’t be good. Was Lamar Odom caught cheating in Vegas? Or is Khloe Kardashian cheating? Because there’s no way the couple would break up over failing to have kids after a couple years, right?

“The only thing Lamar has been sticking around for was a child,” an insider told Star magazine, “But since Khloe hasn’t been able to get pregnant, he doesn’t see any point in staying in the marriage. He’s done.”

Doesn’t Lamar already have like three kids? Do you honestly think he’d leave the Kardashian family over that? I could see him leaving because of Kris Jenner but not Khloe’s baby problems (if she really even has any. I still think it’s a made up story line).

In other Star news Jennifer Lopez and Casper Smart have a sham relationship! Why is it a sham? Is Jennifer just keeping him around to prove to the world that her famous curves are still desirable? I almost feel like the opposite is happening instead. Who’d want Casper Smart’s sloppy seconds?

And Kristen Stewart is flirting with Justin Theroux! This is truly inspired gossip. Kristen Stewart didn’t learn her lesson and she just can’t help but throw herself at taken men. Watch out KStew. Jennifer Aniston already lost one man to Angelina Jolie. You’re child’s play!

Way to go Star! We’ve got some smutty stuff to read this week. I’ve got to check out the Kristen Stewart/Justin Theroux story. I have to find out how they came up with that one! What story seems the most fun for you?