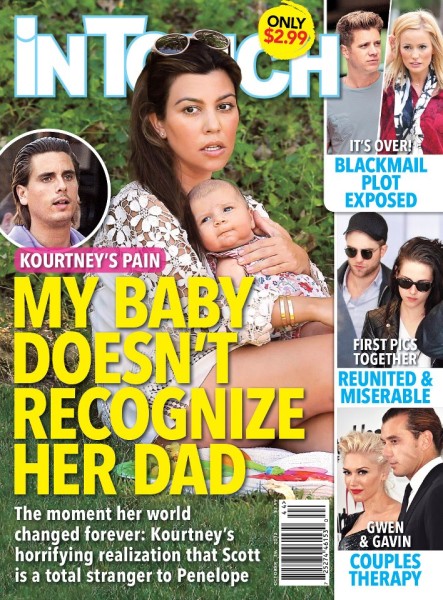 Do babies recognize their dads? I know they do after a time but isn’t Scotland supposed to be all about her mom right now since she’s on the boob? Just saying… I think Kourtney can get Scott for a lot of things. The dude is a douche. But getting him on not spending enough time with a baby that does nothing but eat and sleep is a little boring. Perhaps this has more to do with the fact that he’s been spotted out flirting with mystery blonds and acting the fool? I buy that a lot more.

In other In Touch news, Kristen Stewart and Robert Pattinson are  back together and there are photos to prove it! By now you’ve all seen the candids but is there trouble in paradise already? The mag’s insinuating that Rob and Kristen are reunited and miserable. Does it look that way to you? Are they bummed because the reconciliation isn’t going as planned or because everybody’s up in their business about it? I think Kristen’s just naturally miserable.

And Gwen Stefani and Gavin Rossdale’s marriage is in trouble? NO!! Say it ain’t so! I love those two. Is Gwen’s recent busy schedule and upcoming tour putting the marriage in jeopardy? To be fair, In Touch says they’re going to counseling – not breaking up but it’s a slippery slope! Keep it together guys! But seriously, if Gwen and Gavin could navigate past his love child surfacing then they can get through anything.

All in all a pretty good spread from In Touch. There’s just enough drama with a sprinkle of happiness (sort of) from Rob and Kristen’s reconciliation. Is it enough to make you want to pick up the mag and take a look at the photos again? It is for me and I want to get to the bottom of the Gwen and Gavin problems. That’s going to bother me all day!