No Escape from Divorce for Khloe Kardashian and Lamar Odom 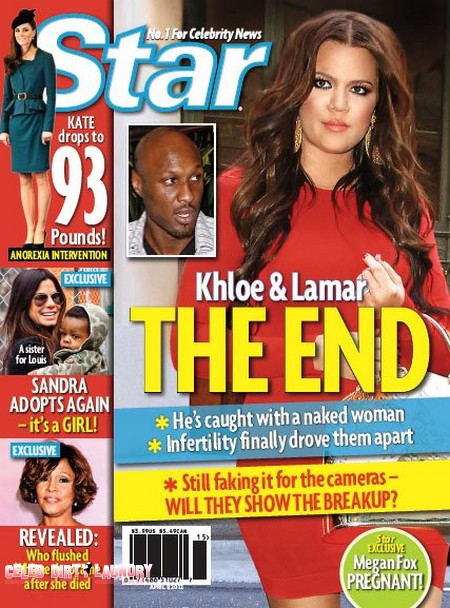 Khloe Kardashian and Lamar Odom are getting divorced and there seems to be no turning back now.  The cover story of this week’s edition of Star mag features the headline ‘Khloe and Lamar – The End’ and explains that there are several reasons the couple will be heading to divorce court.

As Lamar’s frustration with his made-for-TV marriage grows he is seeking to drown his sorrows in strippers!  And we mean some serious whoring around on the part of the formerly great NBA player.  Lamar puts the blame for his basketball demotion not on himself, but on Khloe and her momanager Kris Jenner who force his life to revolve around their media enterprise.

Even worse, as we reported a couple of days ago, Kris is trying to force Khloe to file for divorce to boost ratings for ‘Khloe & Lamar.’  Kris was behind Kim Kardashian’s marriage and divorce and she knows that scandal sells!

Lamar cut Khloe off from sex a while ago and ever since things have gotten even worse between the couple.  Now Khloe is totally freaking out and calling Lamar a cheater as she thinks he is giving the bought and paid for strippers what he denies her!

Khloe wants a baby – as momanager Kris knows that a pregnancy and birth for Khloe will boost ratings and revenue for the entire reality empire.  Lamar meanwhile wants out of the media circus… and into some more strippers!

Khloe and Lamar are reportedly at a “point of no return” in their marriage and friends of the couple tell Star that they fear this is the end for the marriage:

“Khloe viewed his actions as cheating,” a source says in reference to his strip club outing. “She felt violated.” But to make matters worse, the source claims that they never have sex unless it’s when they’re trying for a baby.

“Lamar is getting tired of her obsessing over [having a baby],” the source reveals. “They’re only intimate now they they schedule sex.” Lamar and Khloe had to uproot their lives in LA after Lamar was traded to the Dallas Mavericks, and now Lamar is reportedly depressed over the trade.

“Khloe put on a brave face and prayed that a new beginning in Dallas would be good for their marriage,” the source adds. “Sadly things have only gotten worse. Lamar is super depressed and Khloe is really having trouble handling his emotional issues.”

Can their marriage be saved or has Lamar finally realized that he and his career are not important in the relationship.  Is this the end?