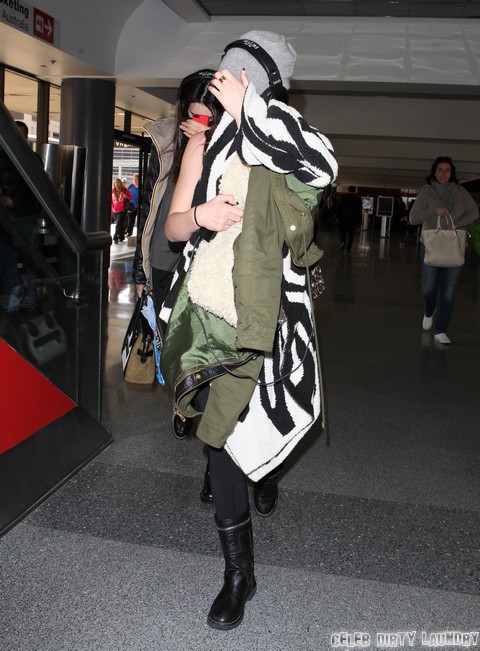 We’ve called her every name in the book: mom pimp, momager, dragon lady, wiley vixen, pervert—but Kris Jenner is adding a new identifier to her list, delusional. The mom of six insists that her children are healthy and normal, despite their public upbringing. In the ongoing pre-divorce drama between her and hubby Bruce Jenner is constant fighting about how to raise youngest daughters Kendall Jenner and Kylie Jenner.

The girls have been featured on the show since the beginning, and many point fingers at major documented parenting gaffs: unlimited shopping, personal computers at young ages, and pole dancing. While the girls don’t seem wild and out of control, most agree that they’re being molded into haughty models with a disposition for eating disorders and a shopping addiction. We know that Bruce tries to keep Kris’ wildest ideas from reaching fruition, but the ruthless mother has reached a new low!

“We are living our lives, we are vulnerable and we are out there. We love what we do,” Kris told Us Weekly, print edition March 4, 2013, in an exclusive interview. “My girls are not pansies, but I think everyone needs direction.” Kris swears that her family is happy with their fame, but near-daily tweets say otherwise. Her daughters are constantly tweeting about nasty paparazzi run ins, lack of privacy, tabloid gossip, and haters. But Kris won’t relent, and pushes her girls because she thinks they’re “happier that way.” Excuse me? Kris admits that she often confuses the worlds she lives in, and causes her family harm when she thinks “business” instead of “thinking personal.”

Kris believes that her youngest girls have grown up well, even though they’ve “grown up on TV.” And sure—no DUIs, no drug abuse, no sex scandals or wild piercings. But they’ve left high school to model (they now home schooled). Instead of spending their teenage years as teenagers, they’re treated as adults, and often fly to work locations with only staff—no parents. Call me old fashioned, but that’s no way to treat a child!

Bruce says that he tries to “teach them to stay humble,” but it’s got to be a real challenge considering the lavish gifts they’re accustomed to. I have nothing against the girls, but their irrational mother isn’t doing them any favors! Bruce needs to step up and set more boundaries! Do you think Kris is crazy and in denial?