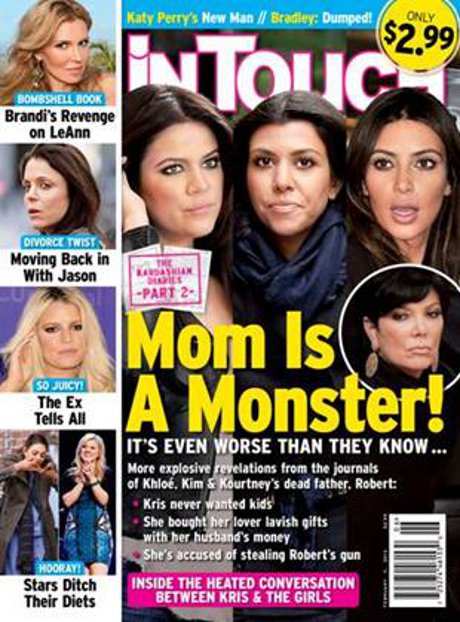 It’s true Kris Jenner is one of the scariest and most intense celebrity managers out there, and according to new information that has surfaced, she was an abusive monster while with her first husband, Robert Kardashian. According to information from Robert Kardashian’s private diaries, Kris was verbally and physically abusive during their time together and totally absent from her daughters’ lives. Robert, in his personal writings, claims that Kris Jenner — who underwent a scandalous affair with a much younger man — didn’t care at all for her children.

This shocking information is reported in the new edition of In Touch Weekly, and it’s about time some more juicy, scandalous gossip surrounding Kris Jenner surfaced in the Celeb World. The diaries and Rob’s other dramatic writings detailing the nature of his diseased marriage were given to In Touch by his widow Ellen Kardashian. Why would she expose such documents to the world? To show everyone who Kris Really is? For money? To defend her dead husband’s honor? Probably all of the above!

The magazine reports: “He loved those kids more than anything,” Ellen Kardashian tells the magazine. “Kris didn’t even want kids…Though she liked buying them clothes, making them beautiful.”

Of course, now that these documents have allegedly surfaced, Kris Jenner is playing the dumb card and claiming she has no knowledge of their existence. It’s a bit weird that — all of the sudden, after all these years when nasty info could’ve been used against Momager — these diaries surface. But then again, is the Celeb World ever really logical? Far from it. Robert Kardashian’s diaries should be published in full ASAP.

Kris’s children have come out to defend their mother’s image, as well as her character as a good mother, but a source close to to the family claims that “What Kris put these girls through is right there in black and white.” Kim Kardashian, Khloe Kardashian, and Kourtney Kardashian don’t need all this bad publicity — but you good and well Momager is fine with it. So long as her family maintains the headlines!

Also in this week’s edition of In Touch: Jessica Simpson’s ex drama; Brandi Glanville’s revenge on LeAnn Rimes; as well as a look into the world of failed celebrity diets! Pick up the copy. On newsstands now.