Kristen Stewart Dating Michael Pitt, Is This Serious Or A Reaction To Riley Keough Rumors? 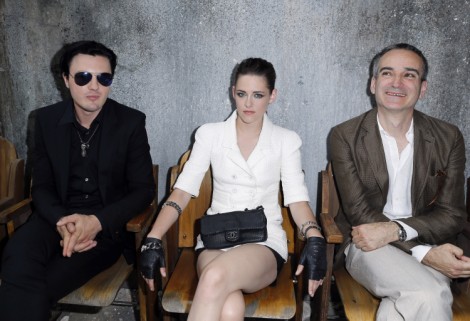 Well, she sat next to Michael Pitt at the Chanel show during Paris Fashion Week a couple weeks ago so now they’re dating! Kristen Stewart sure works fast doesn’t she? Not as fast as Robert Pattinson though so maybe this rebound story has more to do with a little payback than it does of Kristen actually moving on. But let’s test the source first.

The Sun reported today that, at first, Michael was just helping Kristen through the split but then the attraction was just too great to ignore.

“Kristen’s not over Rob but she’s getting there and Michael’s helping her through it. She vowed to throw herself into work and be single this summer. But when she met Michael last week, they hit it off. They both hate the spotlight and are smart bookworm types,” a source said.

Oh for shit’s sake. I can see why the media would want this to happen. Michael Pitt is a more intense, more talented and much darker version of Robert Pattinson. He seems like a logical choice for Kristen. But last time I heard he was still happily together with model fiance Jamie Bochert. And they’ve been together for AWHILE. They were photoed together in April at the Tribeca Film Festival so let’s assume things are still going strong. Granted, it wouldn’t be the first time Kristen has broken up a solid relationship but I’m hoping this one isn’t true. I like Michael Pitt. He’s a pretty good actor but there’s something about the eyes – and you know what I mean. Let’s just say this wouldn’t be the healthiest decision for Kristen Stewart. Michael Pitt would be better at a distance while she’s figuring her life out post-Rob, yes?

Still, Kristen might not hate these rumors. The Riley Keough nonsense is probably driving her crazy. It might not be such a bad thing for her to let Rob think that she’s moving on too. Maybe Rob doesn’t like the idea of Kristen hooking up with Pitt anymore than I do. Who knows? I’m always up for a good reconciliation especially if it’s spurred by jealousy!