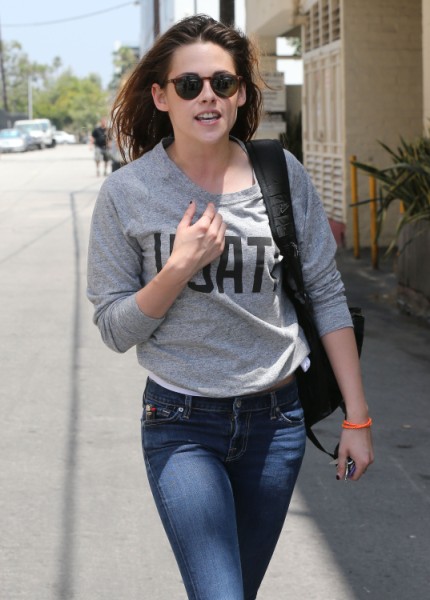 Talk about not getting the best surprise.

Kristen Stewart’s truck got heckled today by an enterprising Twilight fan – or a dickhead paparazzi looking to drum up some excitement. After leaving a studio Kristen returned to her truck to find “I (heart) Rob” written in dust on the hood. There was also what looked like a ticket under the windshield wipers. When it rains it pours….

Here’s the thing though. Everyone’s trying to make it out like Kristen saw the message and freaked out while driving off. I didn’t get that. Check out the video below. Does she even see “I love you Rob”? Kristen Stewart looks like she notices the paper (ticket?) and that’s all. Wouldn’t it be difficult to see the dust writing from that angle anyway? BUT, assuming she does actually decipher the mini-blast, is anyone else proud of her? She didn’t react. She didn’t so much as bat an eye. And for that I salute her. Because, let’s face it. It isn’t easy being Kristen Stewart at the moment. Everyone’s assuming she’s slowly decaying from the Robert Pattinson/Riley Keough rumors. Add that along with getting embarrassed in front of the paparazzi like this and that’s just sucky. The girl just wants to move on but we’re all making it quite difficult for her. I can’t imagine a monster break up in the celebrity world. Facebook is one thing but having to be constantly reminded of your ex-boyfriend via gossip sites/news programs and TBS reruns is quite another.

Oh, and I just found out that Rob’s bestie, Tom Sturridge is co-starring with Kristen in her new movie, Sils Maria. Shit! She can’t get rid of him! If anything good comes out of this little prank today, hopefully Kristen washed her car. It needed it and they really do last longer if you keep up with the scheduled maintenance! It’s the responsible thing to do.